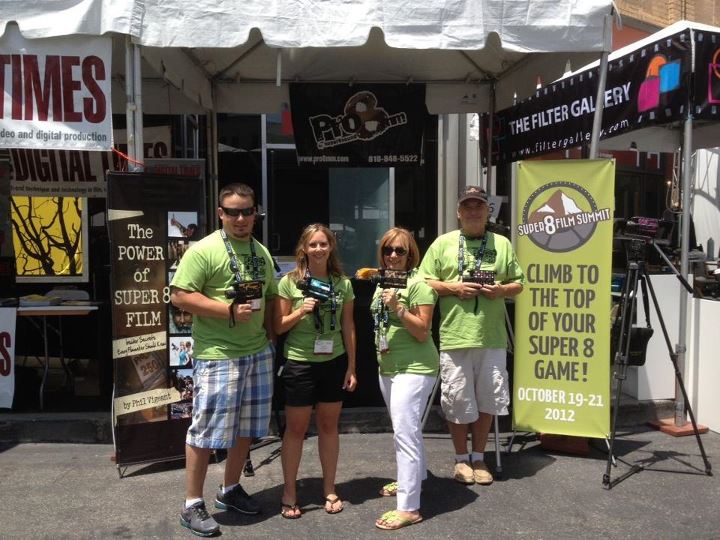 One of the telling things about this year’s CineGear was that there was no film presence to speak of.  Every piece of camera support gear had either a RED Epic or Scarlet, or a Canon C500 or DSLR attached to it.  But even though there was no film to be seen, there was booth 86, and Pro8mm, which gave us a view into the niche world of 8mm filmmaking, and declaring that this retro artform isn’t dead by any means.  In fact, they say they’re the best kept secret in Hollywood.

“I’d like to break the huge myth that Super8 never went away.  In fact, from TV shows to music videos to features, we work on 1,000 projects a year just in Hollywood”. – Rhonda Vigeant, Pro8mm

Founded in 1972 (as Super8 Sound), Pro8mm had the vision of duplicating professional cinematic filmmaking on an 8mm scale with Super 8 sound.  It because so popular that every filmmaking program in the country used their soundsync technology.  But as the world embraced video camcorders and computer editing, one by one those programs began to abandon 8mm filmmaking as it’s bread and butter toolset.  “The biggest segment of our business was student filmmaking,” says Vigeant, “we’ve lost that over the last few decades.”

In 1992, with filmmaking turning away from Super 8 and faced with a dwindling market, Pro8mm went niche and did was even Kodak said would be a disaster … manufacturing and releasing Super8 negative film.   “We had this idea that we could take 35mm movie negative film, split it down the middle, “perf” it and cartridge it, says Vigeant. “And every company in town was using our film whether we got credit for it or not.”

And once again, Pro8mm is swimming up streaming by releasing the RhondaCam, a refurbished Canon 310 Super 8 camera that was popular in the 70s and 80s.  “I wanted to make a fun and trendy camera that had skins, like an iPhone, to give the next generation a link to the past.”  It can shoot in extremely low light, have synced sound via an iPhone app.  The Canon 310 has a crystal sync that allows it to sync up with sound recorded from the iPhone.  “We used it on a documentary of John  Mellancamp called “It’s About You,” that was shot by Kurt Marcus.  They shot over 450 Super8 rolls of film all synced by an iPhone.

Then there’s JJ Abrams Super 8, which Vigeant says was shot on a Pro8mm camera.  Where does Rhonda get these old 310s?  “We look for cameras on eBay, Craigslist, and even yard sales,” says Vigeant.  We have a full time staff that takes them apart and repairs them.”  Vigeant says it takes 3 cameras to remake a single Rhonda Cam, and they’ll buy even broken cameras for the parts.

But Pro8mm’s core business is selling Super8mm film and then processing it just like the old days.  Only instead of a turn around time of 4-6 weeks, Pro8mm can process the film and have it scanned onto a hard drive in as little as 4 hours.  “We have a 2K Scanner with full sync to sync color correction that we transfer to 1080p pro res and we give them their footage back on a hard drive along with their processed film, because film is still the only reliable archive medium.  The cost of the package that includes film, processing and scanning to ProRes starts at $395 for 200 feet of film, with discounts going up top 35% with the more film you shoot and buy.

Vigeant has also written a book called “Get Real About Your Home Movie Legacy” which will be available starting next month on Amazon.  In it, she outlines techniques to save those old home movies safely and future proofing it for the next generation.  For more information about Pro8mm, visit their website or check out their Twitter feed @Pro8mm.