The first full day of Comic-Con ended with a buzz of excitement as breaking news dominated the show. We also saw the return of Doctor Who to Hall H, with a brand new show runner, an exciting new Time Lord, and a whole new vibe! So let’s get to it!

“For me, the Doctor is pillar of hope, and striving for brightness and inclusion,” Whittaker said.

In a change with tradition, Doctor Who opened Hall H this year, rather than close it out. And the cast and crew didn’t disappoint, as the new, 13th Doctor Jodie Whittaker took to the stage, along with new companions Mandip Gill and Tosin Cole, as well as new showrunner Chris Chibnall.

[Jodie] just walked in the room and she was the Doctor. You don’t know what you’re looking for until you see it. – Chris Chibnall

Whittaker also described how she got the part, building a prop of a bomb for her audition and then disarming it as only the Doctor could. The result was being offered the roll right on the spot (course, it helps when your last boss, Chibnall, is the one casting you).

Whittaker also told the story of how the first call she made when getting the news was to 1oth Doctor David Tennant, show yelled out loud with her in celebration and then gave her this sage advice … “This is the most amazing thing that can happen to you,” Whittaker said Tennant told her, “and there’s only a few of us who know how it feels.”  Whittaker also answered a fan question that if she could have any Doctor back on the show who would it be, to which she replied that it had to be Tennant.  Chibnall, on the other hand mentioned that he’d love to have 11th Doctor Matt Smith back for a turn, giving many to hope, that a super Time Lord team up could happen down the road.

One thing that Chibnall did say, though, is that this 11th season will break new ground and fans won’t see any familiar monsters battling the new Doctor, especially the Daleks, who are getting a  much needed rest. This season is all about new faces, new planets, and all of it unfamiliar to this new Doctor. Witness the trailer:

Chibnall also let it slip that Doctor Who has been filming an 11th episode, even though there are only ten episodes in season 11. That means that Whovians will get a Christmas Special in December. Doctor Who returns this fall on BBC America. 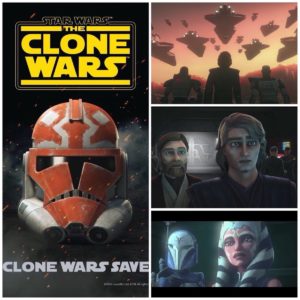 The other great news came out of the Tenth Anniversary Star Wars The Clone Wars Panel, where director and showrunner Dave Feloni announced that Disney will be launching their new streaming service with the return of Star Wars: The Clone Wars for a final, 12 episode season. The popular animated series was cancelled back in 2013, as Disney had acquired Lucasfilm and the Star Wars brand, Even though the series was deep into production of their final season, Disney decided to move on in favor of a new animated series Star Wars Rebels.

“Personally, it’s very rewarding. Any opportunity to put the final pieces of the story in place is meaningful as a storyteller,” Feloni said in an interview with StarWars.com. “I’m happy for the opportunity to define these things and the end of this part of the Clone War.”

Fans never gave up hope that Clone Wars would get that final season, even after Disney had released several unfinished episodes at StarWars.com. “Well, thankfully, their enthusiasm is relentless,” Feloni added. “Their love of these characters and stories hasn’t diminished. I actually think their voice has gotten louder as the years have gone by. It’s been very humbling to have their support.”

Now, it looks like they’ll be able to see what happens with ObiWan, Anakin, and even the return of Ashoka Tano just before the beginning of Episode III: The Return of the Sith, which sets the stage for the fall of Anakin to the Dark Side. The series will return with the launch of the Disney Streaming Service in 2019. Until then, enjoy the official teaser:

DC also announced details of their new super hero centric streaming service called DC Universe. As expected, the service will showcase many of the classic and vintage movies and TV shows from the DC vault, as well as a curated selection of comics. The service will start up in the Fall at $74.99 annual price. More details in our blogpost here.

The last huge bit of news came outside of the Comic-Con Sphere of influence, as Comcast announced that they would be pulling out of their bid to acquire 21st Century Fox to focus on buying SkyTV in Great Britain. The move clears the way for Disney to buy the studio for an estimated $71 Billion, plus $14 Billion in debt acquisition. With the Justice Department giving their contingent approval for the merger, all that is left is for the Fox board to formerly accept the Disney bid.

We finished the day enjoying the Ready Player One Experience, which gave us a tour of the archive, Wade’s room (we had to identify 80s hit tunes), the haunted hotel from the Shinning, and a free play video game arcade.

Stay tuned for more exciting news from Day Two of San Diego Comic-Con. You can follow our coverage in real time at our twitter feed – @doddleNEWS.

Friday Funny: Doctor Who Gets Honest

Last Sunday, DOCTOR WHO returned, with 13th Doctor Jodie Whitaker taking the resigns of our favorite Time Lord. But while everyone’s favorite British sci-fi import is a great hour of television, it is by no […]

By James DeRuvo (DoddleNEWS) There’s a line in the season finale of Doctor Who where the Master mockingly asks Twelfth Doctor Peter Capaldi if the universe is “becoming all girl.” To which the Doctor replies “we can only hope.” […]

By James DeRuvo (doddleNEWS) How many times have you seen  cool visual effects in the movies that cost millions and thought “I wish I could do that.” Well, Red Giant Software is launching a new […]