It’s just about ten days until the biggest pop culture fest in the universe drops in San Diego. What can we expect for San Diego Comic-Con this year? Some changes, some studios missing in action, and some opportunities for other studios to shine. Oh, and comics, too. 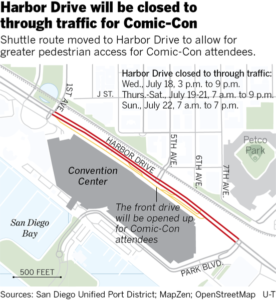 Logistics. The first big change this year to San Diego Comic-Con is that Harbor Boulevard, the street that lines the San Diego Convention Center, will be completely closed off to all traffic, except for convention shuttle buses and first responders. Keeping automobile traffic down to a minimum will make it far easier (and safer) for the estimated 135,000 convention attendees making their way from the Exhibit Halls at SDCC, to the outdoor exhibits, and the Gaslamp District, where there’s many an interesting happening occurring.

Toucan Tracker Wrist bands will also be given out to all attendees for the first panel of each day in Hall H. What are they? Think of it as a fast pass for waiting getting a seat in Hall H. “Toucan Tracker wristbands give attendees flexibility based upon their priorities at Comic-Con,” the SDCC Toucan blog says. “If seat placement is not a priority to you, wristbands allow you to reserve general seating in Hall H and come back in the morning. Toucan Trackers are essentially a way for you to know that you have a seat in Hall H, whether you are physically in line or not!”

Exclusives and Autographs. This year, SDCC is doing something completely different, by having fans who wish to buy major exclusives to sign up for a slot online. Users will log into their SDCC account, and then click on the Exclusives tab to make their reservation. From there, you can either make your purchase, or go to the booth to make it. “An exclusive merchandise purchasing time slot is an opportunity to purchase exclusive merchandise from an exhibitor’s booth during a specific time window (this year we welcome Funko, Hasbro, LEGO, and UCC Distributing!),” says the Comic-Con Blog. “In the past, fans waited in line onsite during the event for ticket distribution – now it is all done online prior to the convention.”

The reservations are also for autograph panels. Deadline for making your reservation is July 12, and even then, you may not get a place in line. All those interested in exclusives and autograph sessions will be chosen at random and notified by email.

Marvel MIA. Like Lucasfilm and Star Wars before it, Marvel Studios will not be having a major panel at San Diego Comic-Con. Ordinarily, I would say it’s due to Disney’s competition D23 Expo in Anaheim, which usually takes place after SDCC. But the next D23 isn’t until 2019, which makes me wonder if this is a kind of strategic pause to keep fans from burning out from all the hype.  Still, it means no appearances of Bree Larson before Captain Marvel, or the cast of Avengers 4 doing their grand entrance in Hall H. Pity. Remember the year Loki took over the panel? EPIC.

Let’s take a trip down memory lane for a second: 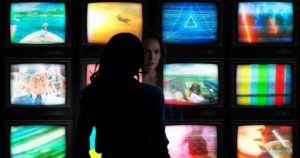 But Marvel Studios’ absence is Warner Bros.’s gain, as the struggling DC universe will a chance to shine even greater. And with Aquaman and Wonder Woman 1984 in production, this will give the Water Tower the opportunity to grab all the attention. And after the lackluster performance of Justice League, they’ll need it.

But not only Warner Bros., Fox will be showing off footage from The Predator, and Paramount will be showcasing the Transformers spin-off, Bumblebee. But like Lucasfilm, Marvel will still have an exhibit booth there, and that could mean signings, but mostly of their TV stars from the Netflix Hell’s Kitchen block.

WHO RETURNS. Doctor Who returns to Hall H this year, with the 13th Doctor, Jodi Whitaker, new showrunner and lead writer Chris Chibnall, and the new cast opening the event this year! Ordinarily, the Doctor closes out Comic-Con on Sunday, but with open time slots, BBC America is showcasing the new era in Hall H on Thursday, Day one this year. It should be very exciting, but it will also allow Who fans to enjoy more of the con, rather than waiting in the soul crushing Hall H line for days on end. No word yet on if Yvette Nicole Brown will sub host duties for Chris Hardwick, who is bowing out this year. Brown is pinch hitting for Hardwick as host of AMCs The Walking Dead, so there’s a chance she may do the same for Doctor Who. Otherwise, you’ll see her in Ballroom 20 chairing a lot of the TV panels.

And when I say the Hall H line is soul crushing, I’m not kidding. You really have to commit to it, if you want to try and get inside the 6500 seat auditorium for your favorite panels. It’s a role of the proverbial dice and I’ve talked to several fans who have spent their entire week at Comic-Con in the Hall H line, only never to get in. But if you do get in, the room doesn’t get cleared out, so you can stay there all day until your favorite panel comes up.

Lastly, don’t bother trying to get tickets to Comic-Con, they sold out in less than a half hour as they do every year, and SDCC did not offer a resale of returned tickets this year. But you can always come down and walk around the outdoor exhibits, to catch some of the feel of it. It’s a grand time for geeks of all ages.

OK, maybe not a billion, but HISHE presents some pretty funny options that go “hmmmmm what about that?” So to celebrate Jason Mamoa‘s super epic and cool Aquaman passing $1 Billion at the Box Office […]