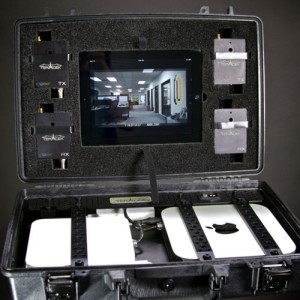 Filmmaker Vince LaFloret – who recently directed Mobius, which recently showcased the Canon Cinema EOS C300, uses a cool computer networking setup called the Teradek’s Cube Video Assist in a box, which, in it’s Case configuration, combines a Mac Mini and an Apple Airport into a single plug and play unit for streaming live view from camera to an iPad or iPod at ranges up to 1000 feet away.

All by itself, the Teradek Cube can stream wireless video to an iPad up to 300 feet away.  Add a wireless repeater to the mix and the signal can reach to nearly 1000 feet.  In addition, while the Cube can stream to a handful of iPads, the Pelican Case, with it’s network setup and 8 foot extension pole allows for streaming video to literally dozens of iPads on set at the same time.

I’ve been using Teradek’s Cube on a good number of productions for over a year now (including the film Mobius.)  It’s an affordable wireless monitoring solution that works with my Marshall field monitors and iPads, or to do proxy recording (aka instant dailies) right on set.  – Vince LaFloret

Also built into the Teradek Case system is a Liveplay server co-developed by Teradek and LightIron.  With Liveplay, video captured on set can be recorded and streamed via Apple Quicktime.  Cube is pre-configured to automatically begin recording a proxy file when action is called the camera is rolling.  A video “daily” file is created realtime to the Mac Mini server in either .MOV or .MP4 formats.  Additionally, the  files use the same filename, timecode and start and stop times as those recorded on the camera media, and is supported by RED One and Epic, as well as the Arri Alexa.  And camera models from Panasonic, Sony and Canon HD-SDI cameras, including the newly announced Canon C300 can also use the Live play proxy server files.  And the Canon 5D Mk. II DSLR is also supported thanks to an update in the firmware which doesn’t break the stream once the 5D begins recording. 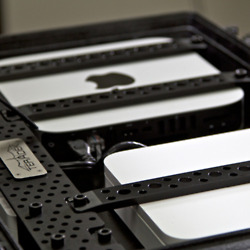 iPads can use Teradek’s app, Teracentral, to acquire and play all Cube videos on the network.  Users just go into the Teracentral app, select the video files as they are acquired and press play.  After a brief loading delay, the stream responds nearly instantly (about 1/3 of a second) to commands of start, stop and review.  Users of the system are also able to collaborate by adding comments to the customizable data fields that are managed through granted user privileges.

The total cost of the system is around $2500 (vs. comparable setups that cost up to 10 times as much) which does not include Teradek Cube encoder or iPads for the set.