In our previous lesson of our look at learning BlackMagic Design’s DaVinci Resolve, we took a look at the difference between Insert and Overwrite Editing.  In this lesson, I want to talk about a few other tools you have at your disposal to get clips into your timelines.

The first editing technique I want to show you is the Replace command.  It’s a very common situation. You’ve edited a sequence you like into your timeline, but you realize that there is one clip that is just not working, and you simply want to replace it.  What many people think the technique is to replace the problematic shot, is much like any other edit you want to add. Mark in and out points, and use the Overwrite (remember, non-destructive) command to replace the clip.

Wow, that’s pretty long, especially if you want to replace a bunch of shots. It would be much more helpful if there was a simple keyboard shortcut you could use to replace that clip. Fortunately, there is! First, choose your new shot, and park the timebar where you want your replacement clip to start.  Now, choose the shot you want replaced in the timeline (no need to add any in/out points), then, simply hit F11 on the keyboard, and that’s it. The clip in your timeline has been replaced. Pretty quick and simple. 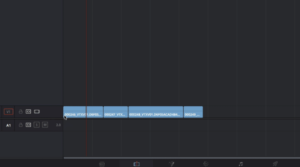 There’s another thing I’m guilty of as an editor. When starting an edit, I’ll dump a long string of clips into a timeline and then start cutting things up from there.  To me, it would seem fairly straight forward. But here’s where things get interesting.  During edits, I’ll always come across clips that I think I’ll want to use, and I throw them down at the end of my timeline, so I can easily come back to them later.  Normally it’s a bit of a pain in the butt, as I’m constantly jumping down to the end of the timeline to add these clips.  Well, there’s a shortcut that let’s me do it in Resolve, quickly and easily.  The standard keyboard shortcut is SHFT+F12 to “Append Clip to end of Timeline.” Consequently, Resolve will add those edits after any clips that are currently in your timeline.  Super handy!

With that being said, if you want to create a timeline like the one I described above (dumping a ton of clips back to back), you can also mark up all the clips you want in the Media Pool, and then select all, or some, by holding CTL/CMD on the keyboard. From there, you can easily drag them all into a new (or existing) timeline, and it gets a ton of clips in your timeline with a simple drag of the mouse.

By Kevin P. McAuliffe In our last lesson, in our look at learning DaVinci Resolve, we talked about Compound Clips, and how to work with them in your timeline.  In this lesson, we’re going to […]

In our last lesson, in our look at learning DaVinci Resolve, talked about working with Windows, and how you can use them to isolate parts of your shot. In this lesson, I want to move […]

In our previous lesson of our look at learning BlackMagic Design’s DaVinci Resolve, we talked about Trim Edit mode, and how you can now trim clips in both destructive, and non-destructive ways.  Now, I want […]