In our previous lesson of our look at learning BlackMagic Design’s DaVinci Resolve, we took a look at both appending and replacing clips in your timelines.  In this lesson, we’re going to talk about another important concept when working in any NLE, and that is trimming.  For this lesson, we’re going to want to make sure you have at least three clips in your timeline. Let’s get started!

We’ve talk about destructive versus non-destructive workflows, so in this tutorial, I want to talk specifically about the non-destructive method of trimming (which is commonly referred to as Rolling Trims).  Before we do that, though, we should talk a little bit about what trimming is, exactly. Once you’ve started putting clips into your timelines, you’ll want to start making major, but more so, minor adjustments to the actual edits.  You don’t want to but using a “meat cleaver”, so to speak, when making your minor adjustments, when a “paring knife” will more do the trick.

What I mean by this analogy is that there are specific tools you’ll want to use when trimming clips in your timelines, as opposed to attempting to re-edit clips where a couple of shortcuts will do the exact same job.  The best part about today’s tutorial, is that there are no keyboard shortcuts required. Just a steady mouse hand, and you’re all set to go!

Here’s where to begin.  First, take your mouse, and hover over an edit point.  You’ll notice that your selection tool will update, and give you a new tool based on whether you’re on the outgoing tail, edit point, or incoming head of the shot in your timeline.  Take a look.

Now that you’ve seen what happens when you mouse over, let’s see what the commands actually do.  If you use the trim mode over the middle of the edit, and drag either left or right, you do a completely non-destructive edit adjustment or a “Trim”.  You’ll also notice that you can “pull back” or “push forward” an edit from an edit point by selecting either the outgoing tail, or incoming head, and simply dragging left or right, and everything is adjusted, with no consequences of sync problems anywhere else in your timelines.

That is also very cool about this technique is that when you grab and edit point to make a trim adjustment, you get a visual representation of the edit you’re adjusting (Incoming Head/Outgoing Tail) in the sequence monitor, to help make your finite adjustments, a little easier. 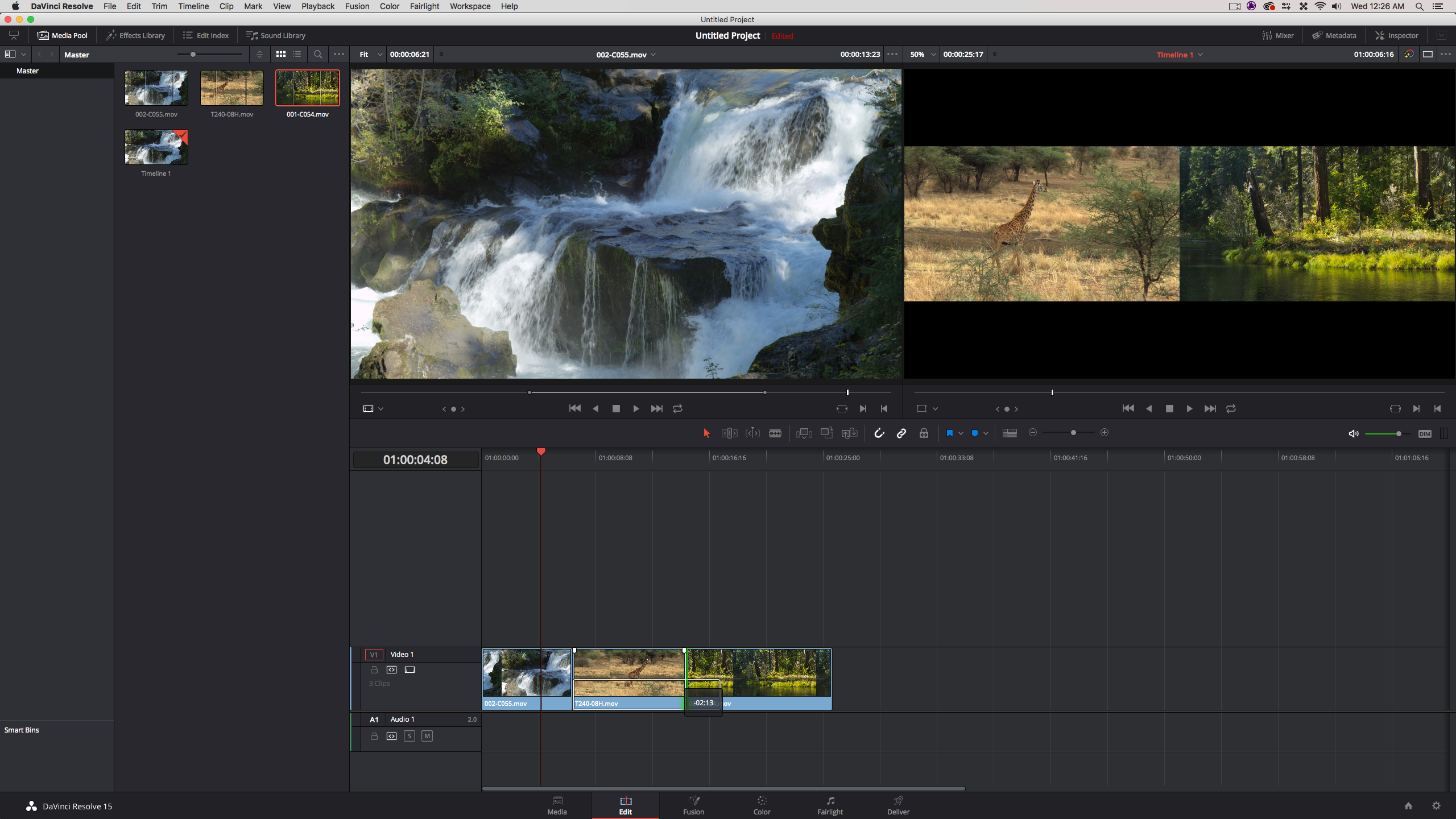 In our next lesson, we’re going to talk about how to do the same technique to an edit in a “Ripple” method, meaning that once you make an adjustment, it will impact the other clips down the timeline behind it!

by Larry Jordan One of the fun benefits to creating titles in FCP X is that so many of them are already created. In the current (10.4.3) version of Final Cut there are seemingly hundreds […]

By Kevin P. McAuliffe In our previous lesson of our look at learning BlackMagic Design’s DaVinci Resolve, we took a look at creating a very cool speed ramp effect that you would see on Survivor […]

In our previous lesson of our look at learning BlackMagic Design’s DaVinci Resolve, we talked about the Slip and Slide commands inside of Trim Edit mode, and how you can quickly adjust your edits without […]