In our previous lesson of our look at learning BlackMagic Design’s DaVinci Resolve, we talked about the great on-screen controls for some of the tools in the Inspector.  In this lesson, I want to talk about applying some standard effects that come with Resolve, where you’ll find them, and how to get access to adjust the effect parameters.

Much like access the Media Pool and the Inspector, you can access your effects library from the top of the Resolve interface on the left hand side.

Once you open the Effects Library (EL), you’ll now see all the standard and third party effects you have on your system.  Third party developers include BorisFX, HitFilm and Red Giant Software to name a few. All the standard effects that come with Resolve appear in the across the three different effects categories including Toolbox, OpenFX and AudioFX.  Inside of the OpenFX category, you’ll find not only standard Resolve effects but third party effects as well. The Resolve effects in this category are called “ResolveFX-INSERT EFFECT NAME HERE”. You can see them in the below image. 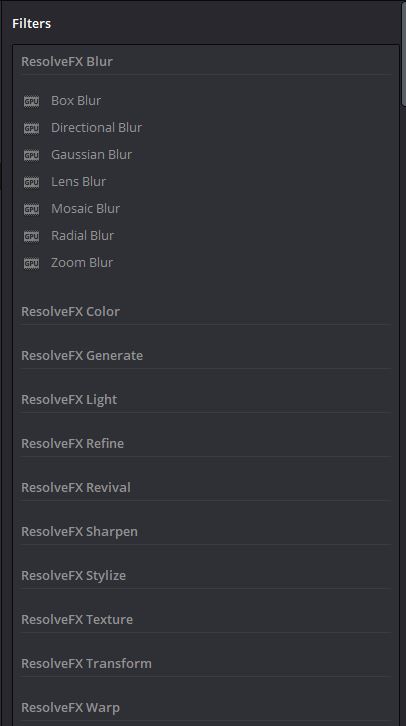 Now, what might throw you off a little is the fact that Resolve organizes the OpenFX category in a non-alphabetical way with the standard Resolve Effects at the top, and others down below.  Slightly annoying, but not a big deal breaker. Now, to apply an effect, simply drag and drop it from the EL, to a clip (or clips) in your timeline. Once it’s there, you should see the results immediately in the sequence window.

Now, jump over to the Inspector, and once it’s open (with the clip selected), you’ll now see the effects parameters that you can get in and adjust. There’s also something else that’s important that I want to make sure that I mention.  With the effects you’re applying to shots, you’ll want to drag and drop those directly onto the shots themselves.

For any Title or Generator elements, you’ll want to drag them onto their own layer, over the footage you want them to appear on.  It would look a little something like the below image.

Now, that does beg the question, how do we actually animate effect parameters inside of Resolve?  Well, we’ll save that for the next lesson!

In our previous lesson of our look at learning BlackMagic Design’s DaVinci Resolve, we took a look at the Skimming Tool, and how it’s a great, simple way to track down your edits points as […]