Last time, in our look at learning DaVinci Resolve, we talked about the basics of importing footage into your Media Pool.  In the next three articles, I want to look at bringing in footage from the three major NLE’s, Avid Media Composer, Adobe Premiere Pro and Final Cut Pro X, as this is one of the more common workflows, as editors more more and more towards doing their color correcting in Resolve.  Let’s get started by looking at getting your footage out of Media Composer and into Resolve.

Inside of Media Composer, it’s best to set up an export preset, if color grading in Resolve is going to become more and more of a workflow for your edits.  The first thing I want to point out is that we’re not going to worry about sending multi-track audio to Resolve. We’re going to assume that you’re going to use just a two channel WAV (or AIFF) for reference, as we’re going to assume that you’re doing a round trip to Resolve, and your final output will end up being done in your host NLE.

When you navigate to your Export window, choose any export setting you currently have, and we’ll alter it, and save it out as a new preset.  We want to “Export As” and AAF file.

Once we’ve selected that option, we’re going to choose to “Include All Video/Data Tracks in Sequence”.  Then, for the “Export Method”, we’re going to choose “Link to (Don’t Export) Media”, as we want Resolve to reference the media in our “AvidMediaFiles” folders on our external drives, and not attempt to embed media in the AAF file.  At the top of the window, make sure you have “Use Marks”, “Use Selected Tracks” and “AAF Edit Protocol” checked. That’s it! 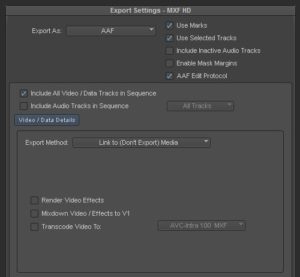 Now simply hit “Save As”, and call the new export preset “Avid to Resolve”, or something along those lines, then head into Resolve and in the “File” drop down, select “Import AAF, EDL, XML”.  Choose the AAF file from wherever you exported it from, and in a matter of seconds, your Media Composer timeline will be in Resolve, and ready to being color grading with. You’ll also notice your media will appear in the Media Pool. One thing that’s important for me to mention before we wrap up is that you’ll want to have as few effects as possible on your footage, as many of them won’t be supported in the roundtrip to Resolve and back again. In our next article, we’ll take a look at how this process works in Adobe Premiere Pro CC.

Next in our series, we’ll look at importing Premiere Pro Timelines. Meanwhile, take a look at our entire DaVinci Resolve Tutorial series here.

In our previous lesson of our look at learning BlackMagic Design’s DaVinci Resolve, we took a look at some of the Modules inside of Resolve that we might not be accustomed to, or ones we’ve […]

In our previous lesson of our look at learning BlackMagic Design’s DaVinci Resolve, we talked about the great on-screen controls for some of the tools in the Inspector.  In this lesson, I want to talk […]

In our previous lesson of our look at learning BlackMagic Design’s DaVinci Resolve, we took a look at our Keyboard Preferences, where to find them, and how to change them if necessary.  In this lesson, […]