One of the cool new pieces of technology I didn’t have a chance to cover at NAB a few weeks ago, answered the age old question … what happens if you cross a jib and a handheld gimbal?  RedRock Micro has the answer in the DigiBoom.

DigiBoom is a new gimbal-stabilized camera rig that merges the best of Steadicam, jib, drone, and handheld with the portability of an ENG camera. Use DigiBoom to add eye-popping shots and premium feel to your live and pre-recorded news, events, and sports.

Working in concert with Disney Research, RedRock Micro developed an all in one carbon fiber jib control poll that has a three axis gimbal on the end, capable of carrying up to 6.5 pounds. The DigiBoom has been designed for field news, ENG gathering and live events. It has been field tested by ESPN over the last few months and shows just how flexible shooters can get in providing cinema quality camera angles with a broadcast application. RedRock has been using the Blackmagic Micro Cinema Camera almost exclusively in their testing, because it can be controlled through the camera control port. 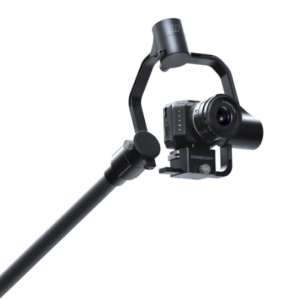 The DigiBoom is made of lightweight carbon fiber, it would have to be in order for a camera operator to control it for 13 hours a day, and is counter balanced on the other end with a battery pack and control unit, and the boom itself is capable of extending out to up to 12 feet with an optional 3′ extension.

DigiBoom also adds a jib adapter for your existing fluid head tripod, a body strap for an additional point of contact and fulcrum control, a dedicated stand for allowing your operator to rest during downtime, and a hard case for air and travel. 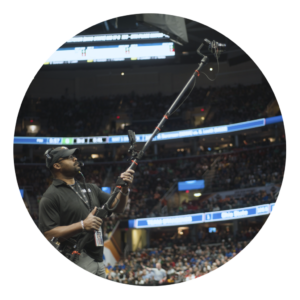 With a 12 foot reach, it would be great for wedding videographers, documentary shooters, and other one man crews looking to get a quick pull away to a bird’s eye view in areas where FAA and local regulations prohibit the use of a drone, and with it’s 3 axis gimbal stabilization, the image will remain rock solid, as the operator reaches the end of their useful control range. The basic length will, however, get you out to at least eight feet.

DigiBoom is powered by 2 Sony NP series batteries, plus it has a 5Pin XLR external power input.  There are also XLR 1/4″ combo inputs and outputs, as well as programmable button and controls, rockers and iris wheels.

Pricing has yet to be finalized, but RedRock Micro is expecting it to be under $5,000, and available this summer. Preorder deposits are being taken now at RedRock’s website here.

By James DeRuvo (doddleNEWS) By the time day three of NAB had rolled around, I had already put over 20 miles on my feet. And with one day to go, I could take the foot […]

By Larry Jordan (LarryJordan.com) This morning, just prior to the start of the 2018 NAB Show, Adobe announced a major update in Adobe Creative Cloud, giving video professionals new tools to automate and expedite time-consuming […]

By James DeRuvo (doddleNEWS) NAB 2014 had us checking out the latest Freefly MōVI M5, but what we didn’t expect was the opportunity to shoot with it for two hours, and to play with their […]