The team at Pixar took it for a spin, too

Are you planning on picking up an iPad Pro? Well, if you are, you know you have to wait until November to get your hands on Apple’s new 12.9-inch tablet. But there are some filmmakers who are using it right now, as animators at Disney have been field testing the iPad Pro ahead of it’s release.

Apple brought in some cool new toys. If I could get the artists to put them down then I could get a turn. – Paul Hildebrandt @paulhildebrandt, Twitter 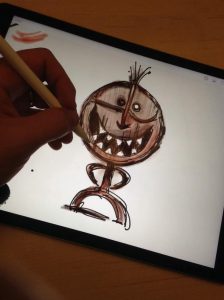 Disney and Apple have been walking arm in arm for years. I remember when I was temping at Walt Disney Animation and Steve Jobs walks up and asks where the bathroom was. No kidding. That’s my Jobsonian experience, I told the man who changed the world where to go to the restroom. Anyway, Jobs was on Disney’s board of directors because he also owned Pixar. Then Disney bought Pixar and the rest is history. But I digress.

Pixar has been testing the iPad Pro for awhile now, and Walt Disney Animation is joining in the field test by giving animators the tablet to use as a digital sketchbook. And it looks like they’ve been putting it to good use for drawing characters from their upcoming projects including Olaf, Mickey Mouse and a Tiki Man that I bet will be showing up in Disney’s upcoming feature Moana.

The animators also used standard sketching apps like ProCreate [iTunes link] and Paper by 53 [iTunes link], both of which have recently been updated to support the iPad Pro and iys Apple Pencil stylus accessory. 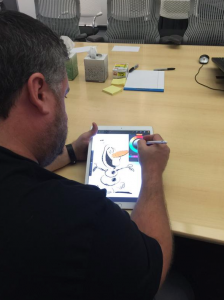 The iPad Pro has a 12.9″ retina screen with a resolution of 5.1 million pixels. It’s driven by Apple’s new 64 bit A9x chip, which sports desktop level performance and a console class GPU. Apple also tossed in twice the RAM which they say makes the iPad Pro 80% faster than the fastest laptop on the market. That kind of performance level means that animators can actually use the iPad Pro to make movies, as it can easily edit in 4K at up to 60fps.

That doesn’t mean that Moana will be made on the iPad, mind you. But as a digital sketching device, it’s got vast appeal since the real jewel in the iPad is the Apple Pencil. This digital stylus allows animators to create artwork directly in the digital spectrum thanks to it’s ability to manipulate sketching at the pixel level. This is because the Apple Pencil scans twice per second to capture more digital information and then transmit it to the iPad Pro.

The new tablet also has a pressure sensitive screen that can adjust the darkness of the image, or even the width of any lines drawn by simply pressing harder or longer.  Apple says it’s as responsive as putting pencil to paper (thus the name).

Now I’m not saying that Disney Animation is going to abandon sketching on paper, but they’ve already left traditional animation behind, so why not make the digital evolution of animation complete by sketching on a digital interface as well? Most of them probably do that with the Wacom Sentique anyway. But the difference is, that the iPad Pro and Apple Pencil makes it way more mobile.