During a Disney earnings call today, MouseHouse chair Robert Iger told investors that Lucasfilm was developing a second live action Star Wars series for the renamed Disney+ streaming service. And it will be for one of our favorite Rogues in a galaxy far far away.

No it’s not Han Solo. That ship has sailed. The new series will follow the adventures of Rebel spy Casian Andor, who we last saw on a  suicide mission to steal the plans to the Death Star in the prequel Rogue One.  There’s not a lot in terms of details, other than it will take a look at the “formative years of the Rebellion, and will be tales of espionage and daring missions to restore hope to a galaxy in the grip of a ruthless Empire.”

Sounds exciting, doesn’t it? Course, the series might not work if it didn’t manage to convince Diego Luna to reprise his role as a rebel spy in the series. And that’s what Lucasfilm added, by saying that he will return to the role. Luna said:

Going back to the Star Wars universe is very special for me. I have so many memories of the great work we did together and the relationships I made throughout the journey. We have a fantastic adventure ahead of us, and this new exciting format will give us the chance to explore this character more deeply.

There is no word on when the series will be released online, but it is expected to begin production in 2019. It will join the other live action Star Wars series the Mandalorian, developed by Jon Favreau. 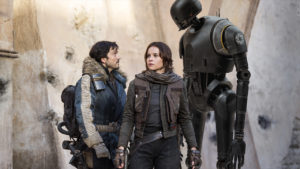 Moreover, there’s no word yet on if Alan Tudyk will reprise his role as Andor’s right hand droid, K2SO, who was an Imperial Enforcer Droid when Andor met him and reprogrammed him for the Rebellion. I hope they do. The origin story of this odd couple, has already been told in a Rogue One comic special Cassian & K2SO, so there’s really no need to recount it for Star Wars fans. But I can’t really see Andor’s adventures without the plucky snark of K2SO giving his opinion when it isn’t really wanted.

I have to tell you, I’m pretty excited about it. Rogue One is my third favorite Star Wars film, behind the original, and Empire Strikes Back. And yes, any fan worth their salt has a list. But what I really am excited about, is getting more into the world that ite takes place in, where the Empire is oppressive, and the Rebellion is struggling to break free. It’s a harsh universe, full of rogues and scoundrels, where the Jedi is now a myth, but its shadow is keenly felt.

Since Disney is also making limited series for MCU characters like Loki and Scarlet Witch, and a buddy mini series with the Winter Soldier and Falcon, here’s hoping that other great characters from the Star Wars universe, will their own adventures on the service. Can you imagine Guardians of the Whills, Chirrut Imwe and Baze Malbus in a series played by martial arts star Donny Yen and Jiang Wen? That’s a team-up I definitely want to see more of.

But in the meantime, I’ll definitely take Casian Andor’s adventures. That world is part of what hooked me into Star Wars back in 1977.

By James DeRuvo (doddleNEWS) Well, we knew they were talking about it. We knew it could happen. But is anyone else surprised that Disney actually pulled the trigger and is buying 21st Century Fox for […]

By James DeRuvo (doddleNEWS) The Blockchain. It’s a buzz word to be sure. Everyone is talking about it, and it’s usually within the confines of Crypto currencies like Bitcoin, Etherium, and others. But while crypto […]