Well, we expected a new DJI Phantom drone, but it wasn’t the one we were expecting. Rather than making a giant leap to interchangeable lenses and a quieter rotor system, the Phantom 4 Pro vs. 2 takes the incremental fins approach and just gives us a quieter flight.

There’s a tick-tock development cycle in technology … the “tick” is usually where you find leaps in design with new features and game changing options, while the “tock” is for refinements and modest improvements (or what we call “fins”). We expected a tick for the next Phantom drone, but we got the tock instead.

With the Phantom 4 Pro v. 2, the refinements come with quieter rotors that reduce the propeller noise by up to 60%. This is accomplished thanks to an upgraded propulsion system that uses FOC Sinusoidal drivers and quick release propellers, making the drone more aerodynamic. The better it is cutting through the air, the more efficient and quieter. But unfortunately, it sounds like while it’s a quieter experience, that efficiency is only audible, as there is no visible improvement to flight time or airspeed.

Other refinements include improved range of its forward obstacle sensing system, which has been extended to 98 ft. That’s a benefit if you’re flying in a wooded area and need to see what’s coming so you can slow down. 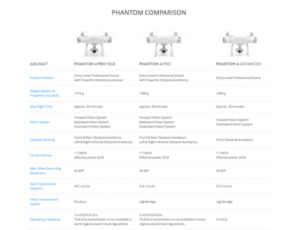 Moreover, another fin for the P4v2 drone is a redesigned remote controller, which is equipped with the OcuSync system with standard and build in screen versions.  The remote is dual band at 2.4Ghz and 5.8Ghz and operates at a maximum range of 4.3mi.

But let’s face it, that’s a dubious feature because FAA rules require maintaining an unobstructed view of your drone at all times. Consequently, if you can see a tiny white spec in a blue sky at 4 miles, you’re more Superman with X-ray vision than a standard drone pilot.

The controller also has a 5.5″ 1080p display with 1000 nits of brightness, support for the DJI 4 Go app, and HDMI port. There’s a microSD card slot of download your video images, a microphone, and even speakers.

Probably the best feature I’ve noticed, is that it’s Return to Home function has been refined. As someone who has lost a Phantom due to a knocked out connection during a hyper active sunspot activity, this is important to me. The new Return Home feature will cache it’s flight path and if it loses connection, it will retrace it’s steps along that flight path until it’s able to reconnect with the drone pilot’s remote control.  If it can’t reconnect, it will make a bee line to it’s last known “return to home” point. That’s a nice feature, and I would expect it to come as a firmware update for other Phantom 4 models. But maybe not.

Price of the Phantom 4 Pro vs. 2 drone is $1499, and it’s available now. Guess we’ll have to wait on those interchangeable lenses. I wonder if they just couldn’t get the wait and balance right. With various lenses comes various weights. So it may be that they’ve got some more coding to do, and the Phantom 5 will be coming… it’s just a matter of when. But I think it’s safe to say it won’t be this year.

By James DeRuvo (doddleNEWS) In two weeks, the world will come together in PyeongChang, South Korea for the XXIII Winter Olympic Games, and NBC will show us all the action with over 1800 hours of […]

There’s a lot of debate going on the internet about what DJI drone is the best. Users argue over flight times, ease of use, construction, and even portability. But as filmmakers, while those data points […]