Yesterday, DJI announced Osmo Pocket, a downscaled Osmo three axis gimbal stabilizer, which adds its own 4K camera, and a huge array of video tools to capture that cinematic moment like a professional.  And since it’s the size of a pair of sunglasses, you’ll want to have it with you all the time.

Capable of shooting 4K at up to 60 frames per second, plus Raw still images, the DJI Osmo Pocket may become the reporter’s best friend.  The pocket size device also has an optional extension rod to get that proper distance for a selfie shot, and in its compact configuration, the 3 axis gimbal mounted camera can slide onto the strap of a backpack, mount to a helmet, or even on the back of your pet to capture the unique action oriented camera angles made famous by GoPro.

Under the hood, the OSMO Pocket has many of the smart functions that made the Osmo Mobile so popular. Those functions include:

The cool feature is that the Osmo Pocket can automatically face track in “selfie mode” or with a double tap of the tiny touchscreen LCD, it can latch onto any subject in the image frame. I really like the motionlapse feature, which lets users add movement to a time lapse to make the image more interesting and cinematic. But my favorite feature is the 3×3 Panorama which shoots 9 images and automatically stitches them together to create a great looking main image.

And while there’s a lot of automatic features, DJI has also created a smartphone app called Mimo which enables you to connect USB-C or Lightning devices directly and adjust all functions manually, including shutter speed and ISO, and can switch into either Story mode, which creates an Instagram like story with a simple tap, or Pro Mode, for full control. There is also a template based video editor.

Accessories for the Osmo Pocket are also available and include: 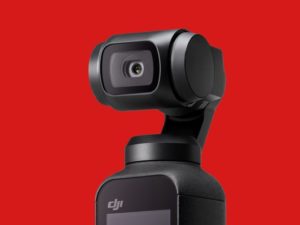 It seems to me that DJI is looking to deliver a killing blow to GoPro by aiming square at their main demographic. The 4K camera and gimbal look to be a redesigned version of the gimbal array on the Mavic Air, which would make perfect sense, as it gives users the same compaction functionality.  It’s very similar in vibe to what GoPro was trying to do with the failed Karma drone and grip, only DJI is made it far more compact. And considering that the Osmo Pocket is cheaper than the GoPro Hero 7, why wouldn’t users flock to it?

Available for pre-order, the DJI Pocket is listed at $349. Shipping on December 15th. The DJI Mimo app will be launched “soon.”