Looking at the new DJI OSMO Action camera, I think I have the answer to my question of what would happen if Apple’s Jony Ive was moonlighting on Apple with DJI. The result is a wonderfully designed action camera that has all the whistles and bells you’d expect from a GoPro, plus a few you’ve always wished it had.

“DJI has always pushed the limits of technology, and the content creators who love our products made clear they wanted us to push the limits of their creative potential too. Osmo Action is our cutting-edge answer to what the creative community demands: Exceptional image quality and stabilization in a unique and durable new form factor, with dual color screens and seamless software integration. For all types of creators who push their gear to the limits, Osmo Action sets the new standard,” said Roger Luo, DJI President.

The first thing that catches your attention about the new DJI OSMO Action camera is that it’s looking right at you. The camera comes with a 1.4″ front facing “selfie” touch screen, which gives the shooter control of all the features of the camera, but from the front. The screen is not only water repellent, but it also resists fingerprints, that would gum up what you’re trying to see. And with a brightness rating of 750 nits, users will be able to see themselves in bright sunlight. Considering that half the work an action camera does is from the third person perspective, I find it amazing that it’s taken so long to do the obvious. Give shooters the ability to frame their selfie shots. 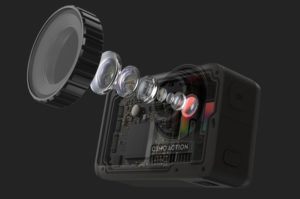 The lens array of the DJI OSMO Action is a three glass aspherical lens with a field of view of 145°, but without the distortion that tends to come from action cameras in this class. The lens is a fixed f2.8, and comes with a screw  on lens protection unit and a lens cap, something I always felt that GoPro should’ve included in their cameras from day one, but didn’t.

Shooting video, the DJI OSMO Action can capture 4K UHD at up to 60 fps at 100 Mb/s, or go super slow motion in HD at 240fps. There’s also recording modes for 2.7K, 1080p, and 720p. And while DJI doesn’t offer D-Log (yet), they do have a feature called D-Cinelike, which is designed to capture wide dynamic range in order to get the best possible color gamut, and details in low light. It’s a flat color profile, so most of that will have to be squeezed out in post.

The OSMO Action also has a special feature called ROCKSTEADY, which is their version of GoPro’s HyperSmooth. And based on the footage that I’ve seen, it’s as good, if not slightly better. The downside though is that when shooting in 4K, it will crop, and DJI says that Rock Steady’s sweet spot is 2.7K. There’s also an HDR Mode, which can be used only in 4K at 30p, but you cannot use HDR and Rock Steady simultaneously.

DJI has also chosen to stick with H.264 .MOV files for shooting in 4K, rather than H.265 opted by GoPro. Interesting.  Other image modes include SnapShot, Custom Exposure Control (up to 120 second exposures), Timelapse, Interval Recording, and Custom Mode. There’s also a quick switch button to move between the modes quickly, and to move from the rear facing LCD to the front facing. All with just three simple buttons.

The Audio quality isn’t bad either, as DJI has dual microphones and stereo speakers, so you can get the best possible sound while recording on the fly. Users also have the option to connect an external microphone through the camera’s USB-C port. You’ll need a dongle though, to go from your mic connector to USB-C. 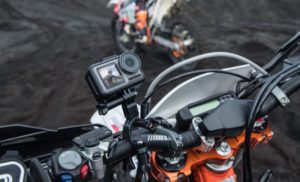 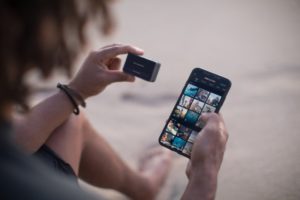 The DJI OSMO Action also has WiFi and Bluetooth connectivity, with support from the DJI Mimo App on your mobile device. The app gives users the ability to offload video and stills to share online, but at the moment, users cannot use it to control the camera. Odd, considering that Mimo can control the DJI OSMO Pocket 4K camera.

The DJI OSMO Action is fully waterproof without the need for an optional waterproof case and can go to a depth of 36′ or 11 meters for up to 30 minutes. As for battery life, the OSMO Action is rated at 93 minutes, but Peter McKinnon reports he got a maximum 135 minutes on a single charge. If you’re shooting 4K using Rock Steady mode however, McKinnon reports that it drops to around 63 minutes.  The camera battery takes about 1.5 hours to fully charge, but users can buy a fast charging adapter to get 70% in as little as 30 minutes.

Price of the DJI OSMO Action is $359, fifty dollars cheaper than the GoPro Hero7 when not on sale. Interesting, considering DJI is entering a market that is flooded with action camera knock offs that costs 1/3 that. This has hurt GoPro in the last year or two, but DJI seems to be unafraid that the OSMO Action will suffer a similar fate. Which leads me to believe that DJI’s biggest competition may not be GoPro at all, but Xiaomi.

Is this an innovative camera? Well, not really. But with just a few extra features, it seems to me that DJI is taking a page from Apple’s playbook, building on the shoulders of giants and taking an established technology to a more refined plateau.

After Cost Cutting and New Products, Things Are Looking Up for GoPro

By James DeRuvo (doddleNEWS) After making a series of cost cutting measures including laying off staff and simplifying their product line, GoPro is finally seeing a return to profitability with a first quarter earnings call that shows […]

By Larry Jordan ALMOST READY, BUT NOT QUITE Recently, team at HDRlog contacted me to review HDRinstant, which is new software designed to create HDR still images from non-HDR video footage. I was intrigued and […]

FAA May Soon Require Drones to Have License Plates

By James DeRuvo (doddleNEWS) The FAA is proposing a requirement of operators of all drones prominently display their drone registration number by use of a mounted plate.  Wasn’t this required in the original drone registration rules? […]