After a last minute cancellation of their live Mavic 2 drone announcement last month, DJI has rescheduled the event for August 23rd. And depending on how you read the teaser video below, the drone company is hinting that there’s going to be some new game changing camera features.

For more than a decade, we’ve taken the dimension of space to give you the freedom of flight. But did you think we’d stop there? Let us take you beyond the horizon, where something incredible awaits. It’s about time. – DJI Teaser video

The teaser looks back on the last decade, and how DJI has mainstreamed the freedom of flight through their line of consumer and prosumer grade drones. Now, it looks like they are moving into the direction of being more of a camera company first and foremost, than a drone company. We’ve seen this evolution coming for awhile now, and a DJI rep confirmed to me at NAB  in 2015 that the company was becoming a camera company. Then, DJI invested in Hasselblad, and it was only a matter of time before those Germany larger format cameras would make their way into the form of a drone camera. 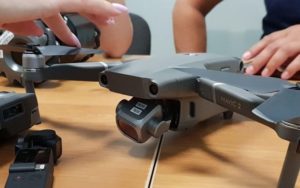 We’ve already seen that partnership yield dividends with DJIs Matrice M600 High Performance drone. And for the last six months or so, we’ve been hearing rumors that DJI was working on a new consumer grade drone that would have a larger sensor, and a Hasselblad based camera design. At first, we thought this would be a DJI Phantom 5 with interchangeable lenses, and that may still be on the drawing board. But then that Argos Catalog in the UK leaked the image of two DJI Mavic 2 drones, one a consumer grade “zoom” model, and the second being the DJI Pro drone with 1 inch CMOS Hasselblad camera.

That would certainly lean towards confirming the “see the bigger picture” part of DJI’s teaser above, but the message also speaks about time and space, which also supports the concept of the zoom model. But I’m also thinking that DJI may be working on some advanced flight modes, which could give users the improved capability for doing aerial time lapses (dubbed “drone lapse”). DJI has already showcased drone artists like Rufus Blackwell, doing this manual technique with an Inspire 2 and Ground Station pro to plan out the time lapse flight path, and then trigger the shutter as you go. Check out this DJI video below:

But getting your drone into just the right position can eat up a lot of battery life, so Blackwell had to rely on the secondary battery of the Inspire 2 for expanded flight time. If DJI has increased the battery life of the Mavic 2 to past 30 minutes, then they can have easily fine tuned the drone’s advanced smart modes to expand “drone lapse” on the Mavic platform, maybe even with some dolly zoom action.

Or, “it’s about time” may refer to the fact that DJI had to pull away from the initial announcement date to make sure they got the camera and flight software just right, and now they are happy to bring us the Mavic 2 with a new Hasselblad camera. That much is happening for sure.

Either way, August 23rd looks to be a busy day, as reports are that Nikon will be announcing their Z6 and Z7 full frame mirrorless cameras on that day as well. So stay tuned here for all the details!

FAA May Soon Require Drones to Have License Plates

By James DeRuvo (doddleNEWS) The FAA is proposing a requirement of operators of all drones prominently display their drone registration number by use of a mounted plate.  Wasn’t this required in the original drone registration rules? […]

By James DeRuvo (doddleNEWS) Honestly, if I did a write up on every press release that I get before NAB every year, I’d have to devote an entire month of all news from the floor […]

There’s a lot of debate going on the internet about what DJI drone is the best. Users argue over flight times, ease of use, construction, and even portability. But as filmmakers, while those data points […]