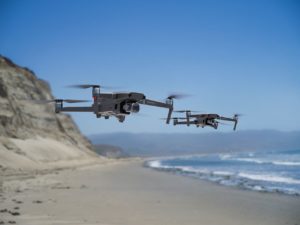 Lately, the rumor mill has been pretty spot on, as I mentioned with the announcement of Nikon’s full frame mirrorless cameras. But although I knew what was coming at today’s live event with the DJI Mavic 2 drones, the hardware spec really wasn’t the exciting part. It was all the cool new flight modes that bring some old school camera techniques to aerial cinematography.

“When the Mavic Pro was launched two years ago, it redefined the way people looked at a drone and expanded possibilities for creators around the world,” said Roger Luo, President at DJI. “Today, we enter a new era of aerial photography with the introduction of DJI’s new flagship product, the Mavic 2 series. The Mavic 2 Pro and Mavic 2 Zoom will enable photographers and videographers to take their inspirations to the air quickly and elevate their creative ideas to new heights.”

Thanks to images leaked by UK catalogue ARGOS, we knew that the DJI Mavic 2 Pro and  Mavic 2 Zoom were coming, with an 24-70mm optical zoom lens camera on the Mavic 2 Zoom, and a 1″ 20MP CMOS sensor, powered by a Hasselblad L1D-20c camera on the Mavic 2 Pro. Both come with quieter rotors, and an expanded 31 minute flight time. We all saw that coming, and both hardware feature sets look pretty amazing: 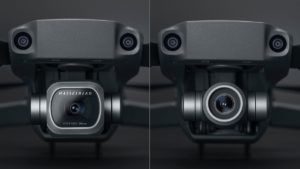 That’s the hardware set, and as you can see, there is what you’d expect from DJI with a new product announcement. Steady improvements in GPS enabled control, obstacle avoidance, and expanded flight times. WiFi connectivity is also improved thanks to DJI’s OcuSync 2.0, which chooses between 2.4 Ghz and 5.0 Ghz wi-fi bands that have a stronger connection and separates telemetry and video signals to keep a more consistent signal. The result is an 8KM range (which really isn’t all that big a deal here in the states, since we have to keep our drones within line of sight).

The Mavic 2 drones also sport omnidirectional obstacle avoidance, which will see that it’s heading towards a potential crash, and recalculate your flight route to both avoid the obstacle and keep your subject within the frame. DJI also has added features that take advantage of the Mavic 2 Zoom’s 24-70 optical zoom lens.

The first is Dolly Zoom mode. You know, that iconic reaction shot that was made famous by directors like Alfred Hitchcock and Steven Spielberg, where you zoom in and dolly out. In Dolly Zoom mode, the Mavic 2 Zoom will automatically flight a dolly back route, while zooming in the lens to compress the image for a very smooth and professional look that before now, was only pulled off by a seasoned drone pilot and cameraman.

The other feature, combines the 2x 24-70 optical zoom lens with the 2X digital zoom to create a longer, hybrid 96mm telephoto lens shot that captures in full HD without loss of resolution.  Hybrid autofocus uses phase and contrast detection for keeping your focus sharp, and can focus 40% faster than in the previous Mavic Pro.

Not to be outdone, the Mavic 2 Pro, offers 10-bit D-Log-M color profile for four times the color gamut, and up to 12 stops of dynamic range. It also offers HDR support and has a cool stitching feature which enables you to shoot up to nine different aerial images of your landscape, and then the Mavic will stitch it together in camera and download an impressive 48 MP master image. Ideal for landscape photography.

And in what could be my favorite feature because it’s so simple, the Mavic 2 has a bottom auxiliary light that will turn on when coming in for a landing, so that the pilot can see his landing pad in fading light. As a private pilot, I love that. 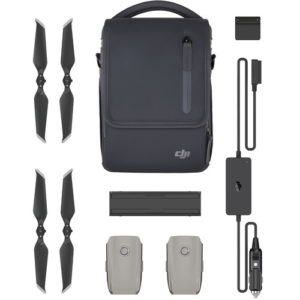 There are some, however, that are annoyed with the fact that DJI has chosen to split the feature set of the Mavic 2 into a pair of drones, rather than one.  Much like the last chapter of a long awaited epic movie saga, the creators opted to split the final story into two, in order to offer twice the detail (at twice the price). And those critics aren’t wrong, I agree.

It’s a bit annoying to have to  lay out $3,000 in order to get all the features that are stacked into these two models. But as a filmmaker, I think most won’t hesitate to must go with the flow and get both for when they have the need. We’re used to such things. On the bright side, DJI also has started up a trade in program, so you can trade in your old drones for a better price on your new Mavic 2.

Both drones are available today from DJI.colm and flagship DJI stores. For more information on all the new features and capabilities of the Mavic 2, please visit https://www.dji.com/mavic-2.

How to Get the most cinematic images from your Drone

By George Shaw Although most of the applications for unmanned aerial vehicles revolve largely around inspection and mapping of extremely large areas, or for use in search and rescue and other applications, there’s no denying […]

By James DeRuvo (doddleNEWS) When the US Court of Appeals ruled that the FAA Drone Registry was unlawful, drone enthusiasts hailed the ruling as a victory for liberty. But now that the FAA will no longer require registration of […]

DJI Can Approve Commercial Drones in No Fly Zones

It looks like the FAA is farming out some of its authority over no-fly zones, by outsourcing to DJI to clear professional pilots to fly their drones within controlled airspace.  Though the Low Altitude Authorization […]