UPDATED: DJI has updated their specifications on the Inspire 2. After further testing the design, the drone company has dropped the top speed specs accelerate to 50mph in 5 seconds, and a top speed of 58mph. “These changes are necessary to ensure speed does not compromise video quality and stability,” the email said.

DJI also stated that the Inspire 2 will also be supported in the DJI Go 4 mobile app, on both Android and iOS.

Well this came out of nowhere, but then again, it’s not entirely unexpected. While we’re still basking in the glow of the super cool Mavic Pro personal 4K drone, DJI Global just announced their 2nd Generation professional grade Inspire 2 quadcopter, with a boost in resolution and a second camera. Not only that, but they’ve also given their Phantom 4 a boost. Let’s take a look…

The DJI Inspire 2 has a Zenmuse X4S 5.2K camera with 11.6 stops of dynamic range. But users can opt for the micro four thirds Zenmuse X5S, which squeezes out 12.8 stops and supports the use of ten different mft lenses added to it. The Zenmuse X5S also can get an optional license key that will allow users to record in cinemaDNG Raw at 4.2 GB/s, as well as Apple ProRes 422 HQ, ProRes 4444 XQ, H.264 and H.265.

Frame rates are up to 60 frames per second when recording in 4K, and the bitrate goes to 100 Mbps. DJI has also created an on board file storage unit called the CineCore 2.0, which enables the Zenmuse cameras to write and organize the video data to on-board SSD drives.

Speed-wise, DJI has improved its top speed to 108 km/h, twice that of the original Inspire 1. And all that speed requires a new battery system, which gives the Inspire 2 up to 27 minutes of flying time, against twice that of the original Inspire 1. DJI has been able to do this by adding second battery, which also does double duty for redundancy and can switch to it should the first battery fail.

The batteries are also self warming, so that the Inspire 1 can fly in extremely cold temperatures of -20° Celsius. DJI’s optional propellers will enable the Inspire 2 to take full advantage temperature capability to reach a maximum altitude of 5km above sea level, not that you’ll be able to take advantage of it if you’re flying in the US, where it would take a special FAA waiver for altitudes 400 feet above the ground.

Software-wise, the Inspire 2 has a new navigation system that uses a second, forward viewing camera to enable the drone operator to continue flying the drone, while the camera operator adjust the Zenmuse camera to get the right show. Working in concert with infrared sensors in the front, bottom and top for obstacle avoidance and precision flight that enables the drone to fly indoors as well. 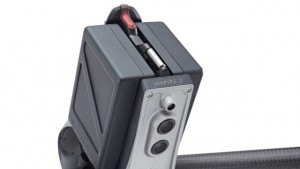 Price of the DJI Inspire 2 will be $3,000 with the Zenmuse X5S and ProRes/Raw license key added at an optional price of $6,200. Shipping in December, and users who order before year’s end will save $200 on the combo. Click here to pre-order the Inspire 2, and here with a more complete kit [affiliate links].

The Phantom 4 also has improved obstacle  avoidance thanks to sensors on all four sides of it’s landing gear that can see in any direction. This allows the Phantom 4 to flight follow in both forwards and backwards and sideways at up to 31 miles an hour.

The Phantom 4 has a longer battery life that has finally cracked the 30 minute window and has new intelligent flight modes to fly both indoors and out.  Users can also map out a flight path through the DJI app to create waypoints by drawing with your finger. Lastly, DJI has also released an optional remote with built in ultra bright display, and separate power to control the Phantom 4 without it impacting it’s on board battery.