If you’re not up to speed on Captian Marvel, the MCU’s newest hero, you’re going to be in the next couple of days.  On September 4th, Brie Larson, who plays the title role, tweeted out….

and then the next day EW ran a huge “reveal” article with Larson on the cover giving us a huge insight into the film as well as co-star Jude Law, and even gave us a glimpse of a younger Nick Fury played by Samuel L Jackson, and the cinematic return of Agent Phil Coulson with a de-aged Clark Gregg.

What makes Captain Marvel and interesting movie in the MCU, is that not only does it cross over with the Avengers Infinity War (Spoiler Alert), but also Guardians of the Galaxy, as Ronan the Accuser (reprised by Lee Pace), makes an appearance in the film as well.

You can check out the full EW article here, and if you don’t know much about Captain Marvel, here’s a synopsis of the film, from the official Marvel press release:

“The story follows Carol Danvers as she becomes one of the universe’s most powerful heroes when Earth is caught in the middle of a galactic war between two alien races.  Set in the 1990s, “Captain Marvel” is an all-new adventure from a previously unseen period in the history of the Marvel Cinematic Universe.” 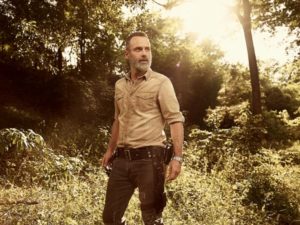 The Walking Dead fans know that this season (nine) of TWD will be the final one for series star Andrew Lincoln’s Rick Grimes.  If you’ve been watching, you’ll know that the war between Rick and Negan has finally come to an end (I won’t spoil it for you if you don’t know what’s happened yet), and season 9 will show the survivors living in relative peace.  Here’s the official synopsis from AMC:

Now, viewers will see the survivors a year and a half after the end of the war, rebuilding civilization under Rick’s steadfast leadership. It is a time of relative peace among the communities as they work together, looking to the past to forge the future, but the world they knew is rapidly changing as man-made structures continue to degrade, and nature takes over, changing the landscape and creating new challenges for our survivors.

As time passes, the communities confront unexpected obstacles, danger, and of course, walkers, but nothing quite prepares them for the formidable force they are about to encounter, which threatens the very idea of civilization that our survivors have worked so hard to build.

HOUSE OF CARDS SEASON 6 GETS ANOTHER TEASER

I was a huge House of Cards fan, and with the controversies surrounding Kevin Spacey, fans of the show were sure that Season 5 was going to be it’s last.  Well, Netflix announced late last year that House of Cards would be brought back for a final season, season 6, minus Spacey, and having Robin Wright step into the President’s chair, and Clair Underwood take over from her recently deceased husband.  That’s right, Netflix will kill of Frank Underwood between seasons, and let Robin Wright step solely into the spotlight! I’ll admit, I wasn’t a fan of season five, but will tune in to see how things are wrapped up!

DOCTOR WHO RETURNS IN OCTOBER

Lastly, the BBC has announced that Doctor Who will return for a 10 episode season 11 on October 7th, and will be moving to a new time slot on Sunday. Showrunner Chris Chibnall has also stated that while history was made with Jodie Whitaker taking over as first female in the iconic role of the Doctor, it will “barely get a mention in the opening of Series 11.”

“The gender issue is pretty by-passed,” Chibnall told the Daily Star. “It’s not really a kind of a gender-related story or anything like that. The first story is much more a story of survival for the new Doc.”

So it sounds like more of the same for our favorite Time Lord, will have her hands full, still having to deal the plight of plummeting from the TARDIS to the ground below. “The last we saw of her she was falling through the air above planet Earth so it’s less about gender and more about: ‘How am I going to get out of this?’

But don’t worry. There will be plenty of time in the 10 episode season to deal with the Doctor’s changes, as she will encounter women from history including civil rights icon Rosa Parks.