This week it looks like that the long in development film based on the mutant Gambit may finally have found its director. Plus, a direct Ghostbusters sequel has been announced along with a third Star Trek spinoff TV series. 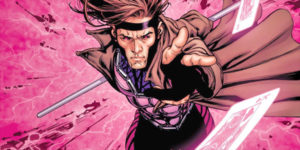 I have my doubts that Channing Tatum’s Gambit project will ever see the light of day considering the problems the project has had with directors. But now it looks like Fox may have found someone to helm the project… none other that Channing Tatum himself! Here’s what Deadline is reporting:

He has long been slotted to play the charming card-throwing mutant, and buzz has been that he might direct the film after several other filmmakers have been in and out. But there is no start date at this point and its still being worked on.

With the Disney acquisition of Fox I expect Gambit and all other X-Men and Fantastic Four films in development to be put on the chopping block. That doesn’t mean that Tatum won’t play the Ragin’ Cajun… but I wouldn’t hold my breath.

We were sideswiped with the news that Ghostbusters 3— a direct sequel to the original two films– is in development. A teaser trailer was released that you can watch here or below.

There’s actually quite a bit of news and rumors going around about this film all of a sudden. Variety reports that Sony has officially hired Jason Reitman, the son of Ghostbusters and Ghostbusters II director Ivan Reitman, to helm the film written by him and Gil Kenan. No word on whether Bill Murray, Dan Aykroyd, and Ernie Hudson will be part of the movie but the younger Reitman confirms that this will be a direct sequel unlike the previous attempt of Ghostbusters: Answer the Call. Here’s what he told Entertainment Weekly:

I’ve always thought of myself as the first Ghostbusters fan, when I was a 6-year-old visiting the set. I wanted to make a movie for all the other fans. This is the next chapter in the original franchise. It is not a reboot. What happened in the ‘80s happened in the ‘80s, and this is set in the present day.

One of the things that I’ve noticed from this teaser is that Ecto 1 is from the first film and not the second. The second version of the car had the ghost in the logo holding up two fingers– although I’m probably nitpicking at this point.

Plotwise, The Hollywood Reporter’s Borys Kit reports via Twitter that the main characters will be four teenagers: two boys and two girls. We Got This Covered quotes a trusted source with a bit more detail with two central characters of a 13 year-old boy who is a conspiracy nut and a 12 year-old girl who is insanely smart but has a hard time with “interpreting and expressing emotions and speaks with a flat delivery that make her observations humorous.” The plot is described as a film that:

Will focus on a family who moves back home to a small town. While there, they begin to “learn more about who they are and the secrets of the town itself.” Unfortunately, there’s no mention of how – or even if – any of the original Busters will factor into the story, but we imagine that this family is somehow connected to one or more of the characters from the first two movies.

If you’re scratching your head and saying “whuuut?” to yourself, join the club. I really don’t think that 12 and 13 year-old Ghostbusters is what fans want to see. At least, I don’t want to see that. These plot details are just rumors at this point and should be taken with a grain of salt so hopefully they are dead wrong. 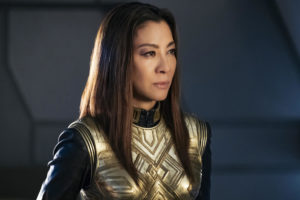 We’ve previously reported a rumor that Michelle Yeoh might be getting her own Star Trek television series and that has now been official confirmed. Deadline reports that CBS All Access is developing the Star Trek spin-off which will be penned by Bo Yeon Kim and Erika Lippoldt. Here’s what Yeoh said in a statement:

I’m so excited to continue telling these rich ‘Star Trek’ stories. Being a part of this Universe and this character specifically has been such a joy for me to play. I can’t wait to see where it all goes – certainly I believe it will go ‘where no WOMAN has ever gone before!’

One of the things that I’ve become critical of Star Trek franchise as a whole is that each series centers around a crew on a starship (or space station) that always mimics the structure of the original series. With this and the Jean-Luc Picard series, the franchise is finally branching out into far more interesting territory.

Star Trek works best on the small screen and with Star Trek 4 pretty much cancelled, it seems like its returning to its roots. Honestly, the recent Star Trek: Discovery season premiere felt like a soft reboot for the series which made it more in line with the tenets of Trek and it improved the series drastically while still playing with form. Hopefully, Ghostbusters 3 will learn that lesson as well.

As for Gambit, well, your guess is as good as mine.