Loads of George R.R. Martin news this week! The final season of Game of Thrones gets a release date plus George R.R. Martin talks about the release of the next Song of Ice and Fire book. Meanwhile, Star Trek looks like it is getting another television series and we have an idea of how long Avengers 4 might be. Let’s start off with Game of Thrones.

Well, we don’t know EXACTLY when the final season of Game of Thrones will premiere on HBO but we do have it down to the month. Entertainment Weekly shared a teaser for the upcoming season with the release month and you can check that video out here or below.

There you have it, April 2019. No new footage at all in that teaser but, damn, it really shows you the whole ride it took to get here! If I were to guess an exact date, I would hazard something like April 27th, 2019 based on previous releases and that HBO would probably try and avoid releasing on the Easter weekend. 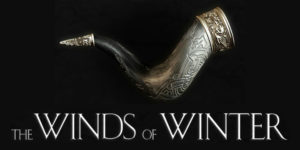 If you’re like me and you read the books that Game of Thrones is based on, you know that it has been a long wait for the next book. In fact, the last book came out less than a month after season one of Game of Thrones ended. Will we at least get the next book, titled The Winds of Winter, before the final season premieres?  I wouldn’t hold my breath.

While speaking with The Guardian about his upcoming faux-history book Fire and Blood he spoke about writing The Winds of Winter. Here’s what he told the outlet:

I’ve been struggling with it for a few years. The Winds of Winter is not so much a novel as a dozen novels, each with a different protagonist, each having a different cast of supporting players, antagonists, allies and lovers around them, and all of these weaving together against the march of time in an extremely complex fashion. So it’s very, very challenging. Fire and Blood by contrast was very simple. Not that it’s easy – it still took me years to put together – but it is easier.

He did reveal that after Fire and Blood he intends on tackling The Winds of Winter. After that book, however, he doesn’t have any definitive plans so he may start working on the final book A Dream of Spring or something else. 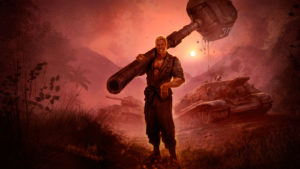 Oh, did you think we were done with the works of George R.R. Martin? Variety is reporting that a writer’s room set in the anthology universe he created and edits with Melinda Snodgrass is being set up for two series at Hulu. This is a little different than A Song of Ice and Fire or Nightflyers in that about 40 different authors have written in the series. Here’s the synopsis from Variety:

Called the Wild Card virus, it has passed down through generations, and can go undetected until suddenly activated by a traumatic event — at which point the carrier is either killed, mutated or granted god-like powers. Effects that are largely a manifestation of the victim’s emotional state, making them vulnerable to reverence or ridicule on a deeply personal level. Now, after decades of sociological turmoil, having been worshipped, oppressed, exploited and ignored, victims of the virus want to define their own future.

I wouldn’t be surprised that instead of a direct adaptation, these two series will just start with the rules set up in the universe and develop new characters and stories. 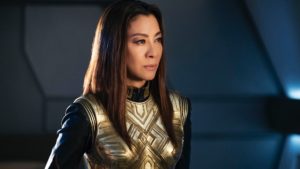 Is Michelle Yeoh Getting a Star Trek Spinoff?

Star Trek: Discovery is a bit of a problem for me, I like aspects of it and really do not like other aspects. One thing that we can all agree is that Michelle Yeoh is one of the best things about the series, first as Captain Georgiou and then as Emperor Georgiou. Now Deadline is reporting that a series based on the character is in the works which would “focus on the on a continuation of her Discovery Season 2 adventures in Starfleet’s Section 31 division.”

Honestly, that sounds like a really cool idea for a series. Can a bad person who basically ran the galaxy in an alternate timeline become a good person? Should she? Can Starfleet even trust her? How does Section 31 even work and what could they have been up to during this time? Plus, let’s be honest, we get Michelle Yeoh as basically Jack Ryan in space which sounds wonderful.

I have to admit, Marvel has been very quiet about Avengers 4. We still don’t even know what it is called. Joe Russo, one half of the Russo brothers directing team, did drop us a bone and revealed during a live Q&A on (of all things) a new LA bar called Duello’s Instagram account (via SyFy Wire). He stated that the current run time is around three hours:

The running time on Avengers 4 is currently sitting right at three hours. We’ll see if that holds.

According to Russo, they’re halfway through the edit which means that the three hours is definitely not an assembly cut. I can’t see Marvel allowing such a long version of the movie and I would easily wager that it will be cut back down to two-and-a-half hours.

Of all of this I have to wonder if George R.R. Martin will ever finish his magnum opus of A Song of Ice and Fire. Where there was two years between the first three books, it took five years for the fourth and another six years for the fifth book. We’re basically almost seven years into our wait for The Winds of Winter so at this point I wouldn’t be surprised if there was an eight year wait for the final book. To put it another way, if the Game of Thrones prequel series gets as many seasons as the original, we may get a chance to watch it from beginning to end before A Dream of Spring ever hits bookshelves.

By Danny F. Santos (doddleNEWS) This week it looks like that the long in development film based on the mutant Gambit may finally have found its director. Plus, a direct Ghostbusters sequel has been announced […]

By Danny F. Santos (doddleNEWS) San Diego Comic-Con 2018 may be over but there is still some fallout left to cover! Some news has been revealed for the Metal Gear Solid and Dune adaptations as […]