This week is all about novel adaptations! Seriously, there’s a ton of news about books being turned into movies and television series this week that I have to wonder if someone sent out a memo that the past week was the time to release adaptation news.

First up we have news about the final season of Game of Thrones. Watchers on the Wall reports that the series just wrapped shooting a major battle that took a staggering 55 nights to film. The entire sequence was filmed in three separate locations and involved 400-500 extras. Assistant director Jonathan Quinlan posted a thank you from “the producer types” on Instagram (before it was quickly deleted) which said the following:

This is for the Night Dragons.

For enduring 55 straight nights. For enduring the cold, the snow, the rain, the mud, the sheep shit of Toome and the winds of Magheramorne.

When tens of millions of people around the world watch this episode a year from now, they won’t know how hard you worked. They won’t care how tired you were or how tough it was to do your job in sub-freezing temperatures.

They’ll just understand that they’re watching something that’s never been done before.

And that’s because of you.

Thank you,
The Producer Types

The next season of Game of Thrones cannot come soon enough! 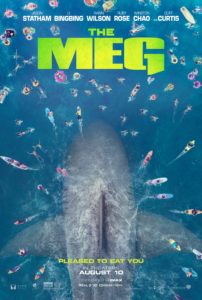 Switching gears to film, we’ve finally received a full trailer of The Meg. Based on author Steve Alten’s Meg: A Novel of Deep Terror, this film has taken a very long time to hit the big screen with Guillermo del Toro attached to produce it at one time. Eli Roth was originally tapped to helm this film before being replaced by Jon Turteltaub. In some ways, I can’t believe they got this out of development hell (since 1997), but they did, and you can finally watch the trailer:

And the international trailer for The Meg: 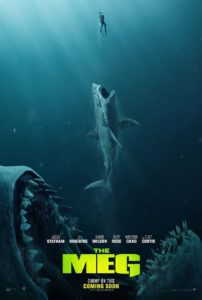 I’m always cautious about shark movies, because they’re really hard to get the tone right. Anything too serious will get compared to Jaws. Once you start leaning into camp, it can quickly turn into Sharknado. The trailer here really feels like it confidently walks the line — it looks like it’ll be a lot of fun without sacrificing the thrills.

I’m a huge fan of Isaac Asimov’s Foundation series. I’ve read the books multiple times including the Robot series and Empire series which were later tied in to create an even more sprawling epic that spanned thousands and thousands of years. According to Deadline Apple has landed the rights to adapt the series with David S. Goyer and Josh Friedman developing a series.

For years there have been rumblings of a Foundation TV series or movie and the rights last sat at HBO in the hands of Jonathan Nolan before the option lapsing. Goyer is currently a member of my “why do they keep hiring these writers?” list so I don’t have high hopes for this series. I can only dream of a world where Nolan is showrunning Foundation — although I feel like that would be at the expense of Westworld which I love dearly. I guess you can’t have everything. Still, I hope that Goyer and Friedman can prove me wrong.

Lord of the Rings TV Series to Cost $1 Billion

You did not read that wrong and every time I report on this series the price tag gets bigger. According to The Hollywood Reporter, Amazon has committed to five season of the new series set in Middle Earth that would cost the service an ungodly $1 billion dollars at the end of the day — as long as it’s produced in the next two years. Even more curious is that this deal also includes New Line Cinema (who produced the Lord of the Rings and The Hobbit movies) and gives this series the ability to “use material from the films.”

I’m still betting that this series will actually be set in the First Age and adapt the Silmarillion. If that’s the case there’s no need to use any shots from the movies in the series. However, I suspect what this actually means is material like costumes and computer generated materials.

I can’t help but point out that the timing for a Lord of the Rings series will mean it premieres not long after Game of Thrones ends. The irony is that Tolkien’s books inspired George R.R. Martin to write Game of Thrones and now the series that Martin’s novels are based on is inspiring the creation of a Middle Earth series — bringing us full circle.

By Danny F. Santos (doddleNEWS) This week we’ve learned that Will Smith won’t be playing Deadshot in The Suicide Squad, but another actor has been approached to take over the role. Also, we have some […]

By James DeRuvo (doddleNEWS) Did you buy a late model MacBook or MacBook Pro with that god awful butterfly keyboard design? Well, if you did, odds are you are experiencing the frustration of sticky keys […]