It’s science-fiction time with this week’s Doddle Digest! We’ll be covering casting news from Star Trek: Discovery, a final trailer for Jurassic World: Fallen Kingdom and talk about the future of the franchise, and finally what we can look forward to in Westworld’s second season. Let’s dig right in!

First off, The Inhumans star Anson Mount has been cast as Christopher Pike according to Variety. Originally played by Jeffrey Hunter in the unaired 1966 Star Trek pilot “The Cage”, the character was recast for the 2009 Star Trek film and played by Bruce Greenwood. Star Trek: Discovery teased the U.S.S. Enterprise in the last few seconds of the first season finale so it isn’t that surprising that they’ve cast a new actor.

Moreover, director Jonathan Frakes (who also played Commander William Riker in Star Trek: Generations) revealed that Spock will be appearing in the second episode of season two — but there’s a twist. Frakes spoke at the El Paso Comic Con (via ScienceFiction.com) where he revealed that a young Spock will be featured in a flashback, as part of Michael Burnham’s childhood. Considering that Discovery takes place about a year after “The Cage” and that Spock served under Pike in the original pilot, not having the character appear on the bridge of the Enterprise in season two of Discovery better be explained somehow.

Next we have a new trailer for the upcoming sequel Jurassic World: Fallen Kingdom. You can check that out here and below!

Up to this point they’ve been keeping the plot under wraps but this final trailer spells it out. It looks like there’s a dinosaur auction for most of the dinosaurs but it seems that Blue the raptor is needed to breed a new dino mutant.

Consequently, Jurassic World director and Fallen Kingdom producer Colin Trevorrow, who conceived these new films as a trilogy, has finally described what the third movie would be like. Here’s what he told Entertainment Weekly:

If I could contextualize each film, I would say Jurassic World was an action adventure, Fallen Kingdom is kind of a horror suspense film, and Jurassic World 3 will be a science thriller in the same way that Jurassic Park was.

Trevorrow will helm the third film and it sounds a bit like he’s coming full circle with the third movie. It’s hard to even conceive what Trevorrow has planned for the final film without knowing ultimately where Fallen Kingdom goes but I keep coming back to the idea of the abandoned Jurassic Park 4 idea which had a mutant military team of human/dinosaur commandos. I doubt that’s where they are actually going but the DNA of that unmade film still exists in these sequels. 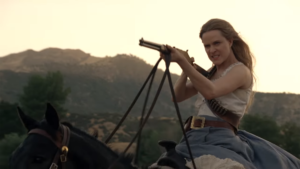 Back in TV land, there’s some new revelations regarding HBO’s Westworld. The series is set to premiere in just a few days and we’re starting to learn more about what to expect. Showrunners Jonathan Nolan and Lisa Joy recently told Entertainment Weekly that we can expect some super-sized episodes. Here’s what they told the outlet:

The premiere is a little over 70 minutes. The fourth episode — which is one of my favorites — is a little longer than an hour. And the finale is just going to keep going and going — it’s a bit of an epic.

To be fair, Westworld is set to take the spot of Game of Thrones as the latter series wraps up. HBO has done pretty well for itself when it comes to genre series, so it doesn’t come as a shock that Westworld follows the Game of Thrones lead into having a fewer episodes that are increasingly longer, culminating in what could be a feature length season finale.

Ed Harris also spoke about his character in season two who seems to indicate that his character will be moving away from the more villainous role he played in season one. Here’s what Harris said (via IndieWire):

I see him as a protagonist actually, yes. Particularly this season. The maze is history. He’s on a whole other track this year, and I think the track that he’s on definitely makes him a protagonist. I’m worried about Season 3, to tell you the truth.

Even though Rachel Evan Woods’ character Dolores is the main character, William (aka The Man in Black) has a very interesting relationship with the park. Jimmi Simpson who played the younger version of the character in season one is returning so it will be interesting to see where the character goes both in the present and where he came from in the past.

By Danny F. Santos (doddleNEWS) I am not a fan of football (apologies to my editor), but there is one thing I do love about the Super Bowl: the trailers. A well crafted trailer is […]

By Danny F. Santos (doddleNEWS) Last week it seemed like most film news really centered on Avengers: Infinity War but now that the news cycle is ramping down on that, a whole bunch of sequel […]