By James DeRuvo, Editor in Chief

The 2018 doddleNEWS Reader’s Poll has closed and we want to thank everyone who participated and shared their views on how and what media news they’d like to see us focus on in 2018 and beyond. There’s some exciting new things just over the horizon, and the data you shared will help us to focus like a laser on bringing you media news that is as timely as it is insightful.

So, without further adieu, here’s some of the most interesting results:

How Often do you visit doddleNEWS? Responses to this question were pretty spread out, with most of you visiting doddleNEWS through our website. But a close second were those from our sister site Digital Production Buzz, and its podcast, hosted by Larry Jordan.  Third, was through other options like Larry Jordan’s weekly newsletter.

What subjects on doddleNEWS do you read frequently? The vast majority of our readers come to doddleNEWS for technology, the latest cameras and supporting gear to best get that shot.  But our readers also come to the site to learn, as just as many visit to read up on our growing catalog of tutorials.

This is fantastic and shows that our focus of maintaining an ongoing cinematic education by learning new tips and tricks is paying off.  Readers also indicated a desire for us to do even more tutorials, and they’re coming! Rounding out our coverage is our product reviews, Larry Jordan commentary, and our movie and TV news. 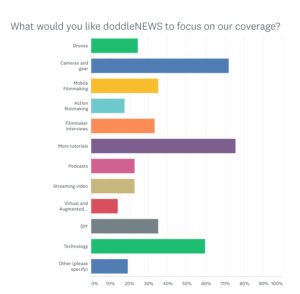 What would you like doddleNEWS to focus on our coverage? This is the one question that confirmed what I had always expected, when it comes to virtual reality, our readers just aren’t into it, as only 14% indicated an interest in this emerging genre. But, of course, you guys are all camera geeks with 72% indicating they like our coverage and want it to continue. This is followed by technology in general, just under 60%.

Mobile filmmaking and DIY tied for third (that surprised me).  I also found it interested that only 24% expressed an interest in drone coverage. This mirrors the reality that only a small percentage of drones are actually used for cinematic applications (it’s single digits actually).

What can we do to make doddleNEWS more relevant to you?  This one didn’t really have a graphic because they’re all personal written replies, but there were a few that I found very inspiring, including “I kind of like DN not always being predictable. It’s a good way to get exposure to other things. If you think it’s cool, tell me about it!” Another mentioned an old saying by hockey great Wayne Gretzky … “skate to where the puck is going to be, not where it is.”  I read that as looking over the horizon for what’s coming. That can be a challenge because rumors are often wrong. But I do enjoy reading about the bleeding edge, like Canon’s new 13K sensor, and stuff like that will continue to fascinate.

And as always, there’s a desire to learn more, as we mentioned, and we’ll be bringing you more tutorials. In fact, we’re looking for someone who can write Adobe Premiere Pro tutorials. So if that’s you, drop us a line!

We also had interest in music production, which I’m going to sit and think about. Our writer, Danny Santos is an accomplished musician, and I know he’ll be thrilled about that.

What’s your experience in the film business? Intriguing here is that most of you reading doddleNEWS are industry veterans. Couple this with the replies wanting more tutorials to learn new tips and tricks, and we see an audience that is always looking to learn something new, and to incorporate it into their workflow. And our goal will be to facilitate that. 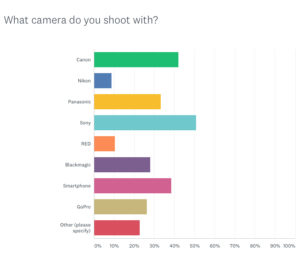 What camera do you shoot with? The replies to this question mirror a story we did a few months back on camera rentals in 2017. Most of you are shooting on Sony cameras, followed close by Canon and Panasonic. But right up there is shooting on a smartphone, meaning that mobile filmmaking is definitely a thing, and we’re watching it closely.  Interesting is that RED has just slightly more users than Nikon, underscoring that some would prefer we focus on the more affordable platforms, rather than the big boys.

The rest are for our internal consumption. But we thank everyone for giving us your views on how you are consuming your media news. At NAB next week, doddleNEWS will have some HUGE announcement as we chart our course for the future, and your replies will play an important part in how we report that news moving forward.

Stay tuned, it’s going to be an exciting year!

Virtual reality is still a technology in search of a medium, and we have yet another example of how cinematic story telling is just not that into it. IMAX had been working in partnership with […]

Shooting Behind the Scenes Videos with a GoPro

By James DeRuvo (doddleNEWS) Shooting behind the scenes videos offer great added value to projects that you are creating for your clients. And film competitions like My RØDE Reel to require BTS videos to feature […]

By Andrew Devis (doodleNEWS) Adobe Premiere Pro has some great tools, and we’ve already looked at several of them. Some basic visual effects are part of those tools and in this tutorial, we want to look […]