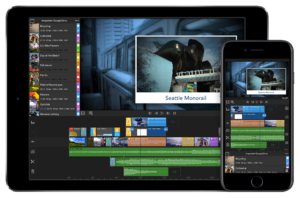 There are a ton of mobile editing applications out there for you to use to cut your “videos on the go”.  So how do you know which is a more….professional one, that will differentiate itself from all the less feature intensive apps out there.  LumaTouch’s LumaFusion for iOS is looking to stand out from the crowd with an app that packs a ton of features in, and is specifically targeted at video professionals, and aspiring producers, journalists and filmmakers alike!  Let’s take a look at whether LumaFusion is worth your money!

Now before we get rolling, let’s talk cost and platform.  I’m reviewing this on an iPad mini and, to be honest, I wouldn’t be trying to edit anything on an iPhone, simply because of its size, not because of any performance issues on LumaFusion’s part.  That’s just a personal preference, and your mileage will obviously vary, depending on which iPhone you’re attempting to edit on.

As far as cost goes, you’re looking at $19.99 and it’s available only on the App store. Keep in mind that it runs only on iOS 11, and nothing earlier!

Once you download (134mb) and launch the app for the first time, you’ll be asked if you’re cool with LumaFusion accessing your photos/videos and your music library and then, very cleverly, it asks if you want to watch a tutorial to get you started. 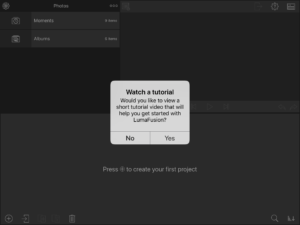 Once you’ve watched the short, 5 minute tutorial, you’re ready to get started.  You can create a project by simply pressing the “+” key in the bottom left of the interface.  Enter the name of your project, frame rate and aspect ratio, and press “Create Project”. Luma is fairly impressive with how many different Frame Rates and Aspect Ratios there are. 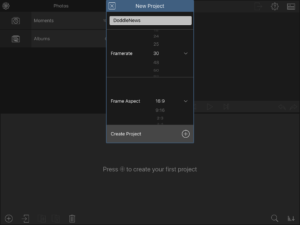 Now you’re ready to start dropping clips into your timelines, and this is where I was really blown away.  Not only do you have access to whatever video and audio clips are available on your device, but you also can access footage from a ton of online sources including iCloud, Dropbox, Google Drive and even OneDrive, as well. The footage will be downloaded onto your device, and ready to added to any project you’re working on. 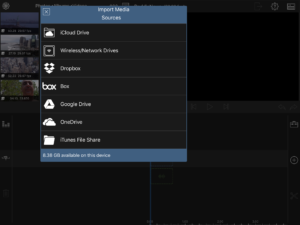 To start choosing clips to add to your timeline, simply click the clip you want to add, and it will open in its own window. From here, you can simply drag and drop the in/out range, and press the “Add to Timeline” button or drag the clip from the media pool down into your timeline, and your clip will now be added.  What’s also very cool, is that once a clip has had an in/out range selected and added to a timeline, you’ll notice the clip will have the range selected in the thumbnail, and a checkmark on it to let you know that it’s currently in a timeline. 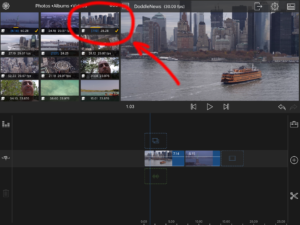 Don’t want a clip in your timeline any more?  Simply drag it over to the trash.  There’s also a very clever way to change between insert and overwrite editing.  You’ll notice at the left side of the screen, an icon between the audio mixers, and the trash can.  That’s how you switch! 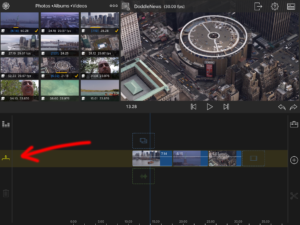 Speaking of audio, by clicking on the VU meter icon, you can toggle between your audio mixers, and your audio VU meters, which is very handy as well.  What also makes things very interesting is that you can add clips to your timelines with audio (and video, obviously), but you can also add up to an additional 3 audio and video tracks for music, SFX, titles and graphic overlays if you need to!

Adding additional elements like transition effects and titles is just as easy as adding new clips to your timelines.  The “Toggle” icon in the upper left hand corner of the screen will let you toggle back and forth between the the elements you want to add (Photos/Videos, Imported/Cloud Media, Royalty Free Music, etc) and, again, simply press on the transition or title you want to add to your timeline, and then simply drag and drop the effect/title/etc to your timeline. I also want to point out that you get 46 tracks of Royalty Free music for you to use, the instant the application is downloaded and installed. 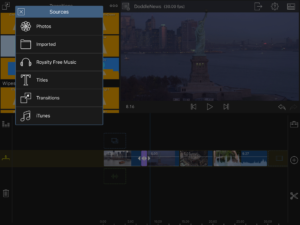 I want to talk a little about titling and exporting before we wrap things up. Titling is an important aspect of making videos, and adding and editing titles in LumaFusion is not only easy, but it’s also SUPER in depth.  Once you’ve headed over to “Titles” section, you can choose between one of the pre-built titles, or start with a basic plain white title, and stylize it up from there. Simply add the title to your timeline like any other element, and then double click on it to adjust.  Now here’s where you have an absolutely staggering amount of choice, everything from strokes to drop shadows to pre-built text looks.

Exporting or “Sharing” your video in LumaFusion is just as simple as everything else and, again, the options for exporting is staggering.  Everything from you Photos app on your iPad/iPhone to Vimeo, YouTube, Facebook, Google Drive, and a whole ton more. You also have a lot of settings you can adjust, even the ability to export 360 degree VR video to platforms that support it. 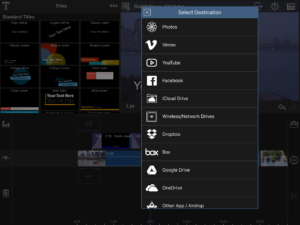 Last, but certainly not least, just recently GNARBOX has announced LumaFusion support for their SSD’s, so you can now select GNARBOX as a source in the Sources dropdown, and access all your footage over WiFi, right from within LumaForge.  I’m including a link here, so you can check out this very cool integration feature. (Editor: We’ll also be reviewing this cool device shortly.)

The biggest issue I have with LumaFusion is that it’s such an in depth non-linear editing application, I could only really scratch the surface of what it’s capabilities are. But let me tell you this, if you want a full featured editing application for your iOS device, the $19.99 price tag for LumaFusion is a steal, as it has just about every editing feature you could need, in one powerful little application.

You can check out more about LumaFusion at the included link.

By Kevin P. McAuliffe In our previous lesson, in our look at learning BlackMagic Design’s DaVinci Resolve, we talked about Animating in the Color Module.  I thought we would take a side step for this […]

In our previous lesson of our look at learning BlackMagic Design’s DaVinci Resolve, we took a look at the difference between Insert and Overwrite Editing.  In this lesson, I want to talk about a few […]