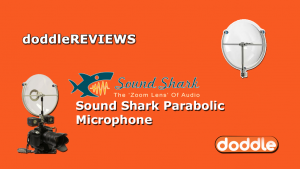 When you’re shooting there are some times that you simply cannot get that tight close up or two shot to capture the audio with your shotgun. You could go wireless, like with the RODE Filmmaker or News shooter kit, but what if you’re needing to capture a wider range of audio from a distance? That’s where the Sound Shark Parabolic Microphone comes in handy.

Sound Shark’s parabolic collectors amplify sound by focusing sound energy onto a single point. This allows the Sound Shark to zero in on your subject while rejecting unwanted ambient noise. – SoundSharkAudio.com 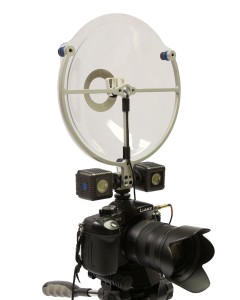 Proudly made by Klover Products, the same company that build parabolic microphones for the 2014 Super Bowl and World Series, the Sound Shark is very similar in design to it’s broadcast cousins, only smaller. It was designed to fit atop of a DSLR or camcorder and is about 9 inches in diameter. The parabolic dish itself is made of high impact clear poly carbonate, housed to an aluminum U-shaped exoskeleton with a cross bar in the middle that holds a very sensitive lavaliere microphone.

The microphone itself doesn’t look to be some cheap lav either. It looks to be well made with a thick, shielded cable and sturdy gold plated 3.5mm mic jack. But if you already have a microphone you’re used to, it’s a fairly simple affair to replace the mic that comes with it for your own. Sound Shark even has a YouTube video on how to do it (part of their video series “Shark School), but it’s essentially just as easy as squeezing the outer arms of the plastic mounting clip, removing the mic and then rethreading your own.

Additionally, the Sound Shark’s parabolic dish and frame are adhered to the aluminum hot shoe mount by a breakaway joint and two nylon screws, so if you run into someone or something accidentally, the mic will break away from the camera cleanly, without damaging the camera’s hot shoe mount. If you want a more solid mount because you plan to lock down the Sound Shark, you can add two more nylon screws to make it more secure. But be warned here, that if you forget to take them out before putting it on the DSLR, you could run into calamity.

It couldn’t be simpler to install to your camera as it has the same cold shoe on the bottom as any other microphone. But the cold shoe is also a standard 1/4-20 to cold shoe adapter so you can remove it and place the Sound Shark onto a tripod with relative ease. Then all you need to do is plug the 3.5mm mini-jack of the lav mic into your camera and you’re off to the races. And though the lav mic has a build in foam wind screen on it, the parabolic design shields the mic from wind noise that swirls around the perimeter of the dish.

Sound Shark promises that users will be able to focus in on a narrow range of audio, much like your shotgun, but with a superior sound quality that cuts through ambient noise better from a distance of up to 30 feet with the same signal level than if you were 5 feet away. The benefits here for a one man crew are obvious. There’s no set need for hiring a boom operator to get the kind of multiple subject interaction that you would need from a group setting or scene.

The Parabolic dish works to tightly focus the audio coming into the dish, that is parallel to the center line. When a microphone is mounted inside a parabolic collector, it collects incoming sound (pressure) waves that bounce off the dish to that single point where the microphone converts the collected sound energy into an electrical signal. Because the sound energy from a large area is focused onto a single point, the sound is in effect, amplified. That’s how SoundShark describes it anyway. And it works quite well. You can learn more about the science here.

Who can use the Sound Shark? Just about anyone really: ENG, wedding videographers, and even action camera geeks can get benefit from it (you’ll need a cable adapter though). One ideal option is that with a GoPro or unmanned camera, a wedding videographer is often times forced to stay clear of the altar due to the sacredness of the ceremony. And let’s face it, on camera audio, especially with a GoPro isn’t all that stellar.

With the Sound Shark, you can place it near the ceremony, without being intrusive, and then point the shark towards the officiant to get some great audio. The footage from another camera can then be synced and not miss a moment due to a fishbowl sound. The audio quality is definitely an upgrade.

My son is in marching band at school, and I would have loved to have had the Sound Shark with me during the marching season, because it really performs as advertised. It’s compact, light, and offers some impressive sound quality.

The build quality is very impressive, with solid parts that show no signs of cutting corners. It’s well thought out and the fact that it’s very easy to dive in an use is a testament to that. There’s really no way to get bad audio unless you absent mindedly put your subjects in front of an overwhelming sound source that will end up end up drowning them out. But if you keep your situational awareness, the Sound Shark really does all the work.

How’s the audio quality? Well, Sound Shark says it’s better than your shotgun microphone, and it may be, from the range they tested it on. But I didn’t find it to be superior to my RODE VideoMic Pro, nor inferior to it either. And that’s saying something. I think that the farther you get out of the range of a shotgun, it’s definitely an advantage for the Sound Shark, because a parabolic mic can really pick up sound as it reflects off the Parabola. The math makes it that sound can be picked up from quite a distance. So when my son’s band marches in his next parade, I’m sure to be able to get the music from quite a distance.

The only real downside is that the device doesn’t come with any sort of a manual. There are basic instructions printed on the back of the box, and for most that will be good enough to get you up and running. But if you want to do any thing else, like replacing your microphone, or adding those two extra nylon screws (which were just tossed into the box). To even know you can do that, you have to go online to find it. But the website is very informative though, with videos and other PR information. But it would have been nice to have a small manual that provided a list of things we should know about.

Price of the SoundShark is a tad up there though, at $285. If you’re a wedding videographer who shoots intimate shots of close ups and small groups, the Sound Shark may be a bit of overkill. But if you need a mic that can be where you can’t and still get that up close and personal sound, it’s a definite option. You can buy one here . For more information, visit SoundsharkAudio.com. They will also be at NAB April 24 to 27 at booth #C6841.