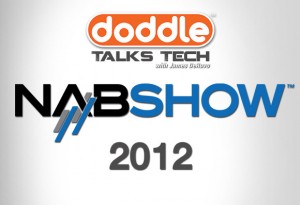 NAB 2012 may have ended a couple of months ago, but we’re at a crucial point: announced gear and software are starting to be released, and soon we’ll see the Blackmagic Cinema Camera, Sony’s new gear and more, plus Adobe CS6 has been out “in the wild” for a little while now. I’m joined by doddleNEWS Web Content Manager Heath McKnight as we discuss what was announced.

By James DeRuvo (doddleNEWS) “We’re going to a world where you can’t hide behind expensive toys, that you’ll have to be able to tell a story.” That’s a peek into this month’s doddleTALKS Tech, with […]

doddleTALKS Tech: Whatever Happened to the Digital Bolex?

By James DeRuvo (doddleNEWS) In this episode of doddleTALKS Tech, I finally track down Joe Rubinstein and Elle Schneider, the creators of the much-hyped Digital Bolex D16 digital camera. Joe and Elle talk about their […]