There is a video of a guy who took his DJI Inspire 1 for its maiden flight; within 5 minutes, he had crashed the drone into a brick wall, destroying it. He even entitled his YouTube Video “How to Waste $3000 (Drone Crash). And why? Well, because he didn’t know how to fly it, and instead of flying in the safe surroundings of a grassy park, he flew it in a parking lot surrounded by brick buildings. Disaster was inevitable. But not because the Inspire is cheaply built, but because he didn’t do all his crashing with a cheaper drone before he invested in a more expensive model.

First off, here’s the video in question…

That kind of pain could have been avoided. I have a Phantom that I’ve crashed over and over again, and it’s pretty tough. But I finally decided that rather than put such an expensive piece of hardware through all that abuse, I’d invest $50-100 into a much more affordable ‘learning’ drone, that if it crashed or flew away, I wasn’t be as upset as if I lost a $3000 drone.

So I went to Amazon and found the Syma X5C 4, cheap Chinese knock off that looks a lot like the Phantom, only about half the size, and only about 5-7 minutes of flying time (I bought a handful of extra batteries for $5 a piece). But certainly enough to practice with. And the best part is, it comes with a 720p HD camera, so I can still record my test flights. It even came with prop guards and an extra set of props. Not bad, and they were so cheap, I bought TWO!

Now granted, it doesn’t have GPS lock, it’s full manual, but if you want to get used to how squirrely these things get, it’s a good way to dive into the deep end of the pool. I took it outside and, you guessed it, crashed it into a tree. But I was able to get it out and I was back in the air in minutes. So that’s good news. 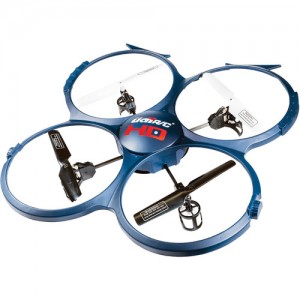 Another option is the UDI U818A which offers a 6-axis gyro for a more stable flight envelope, 4-channel 2.4 GHz handheld transmitter. and a 720p HD camera. It also has a flying time of about 7-9 minutes, since its battery is only a 500mAh, and it’ll take two hours to recharge, which is why you want to buy an extra battery or two.

But it also has two-speed settings, so you can set it to slow while you’re learning, and then move to a faster speed when you’re confidence is built up. It even does tricks. Pretty cool. The U818A is designed to fly indoors, but you can use it outside on a calm day.

If you want to go up a little higher, Parrot AR has the Drone Quadricopter 2.0, Elite Edition, which for $300, gives you the added benefit of flying from your smart phone or table, and getting an automatic return home feature, and a director mode to program automatic movements. Parrot also has the Bebop, which gives you GPS Stabilization, Full HD 1080p forward facing camera (I mean, it’s literally a flying camera and not a camera underneath), automatic return home, and you can even set speed and altitude limits.

You can also fly it indoors with the foam bumpers, and either fly it with your mobile device to pick up the optional hand controller. I’m in the process of testing one for a future review, so stay tuned.

And DJI even their own low-cost quad called the Phantom 1 Trainer, which is the first generation Phantom which for under $500, gives you similar flight characteristics of the Phantom and Inspire, plus the GPS control, the ability to add a GoPro underneath, and 15 minutes of flying time. It’ll even fly back to you when it gets low on battery life.

“You can practice and crash the crap out a cheaper one without trashing a $1,000 quadcopter.” – Matt Edwards

The point is, by investing in lower cost drone to attack the learning curve, you are giving yourself the option of making mistakes and not regretting it as much as the guy in the video above. You can buy two or three of the Symas, crash them, trash them, and learn from them. And that is a wise move. If you don’t believe me, listen to pilot and cinematographer Matt Edwards in the video below: