There’s a lot of debate going on the internet about what DJI drone is the best. Users argue over flight times, ease of use, construction, and even portability. But as filmmakers, while those data points are important, nothing compares to image quality of the camera on board. And for that metric, science wins over opinion. And one filmmaker has the answer, which may surprise you. 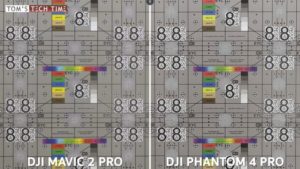 This comprehensive look at sharpness, color, and resolution comes from Tom Frey of Tom’s Tech Time on YouTube. He took a mathematical approach with a complicated test chart of nine separate sectors with test cards, gray scales, ZMan’s stars, and other printing lines that will show how well each drone camera handles detail and color accuracy.

Who won out? Well, surprisingly, Tom found that the DJI Mavic Pro 2, with its 1″ Hasselblad camera sensor, offered more accurate color – especially with yellows and green, while the Mavic 2 Pro struggled with blues.

When it came to sharpness, Tom measured the sharpness settings from -3 to +3 to find the optimal sharpness settings for both  drones. Tom used 4K, with D-Log for the Phantom 4 Pro, shooting at 25 fps (he’s from Europe) with auto white balance. He also tested the Mavic 2 Pro in DLog-M. With similar settings. Although the distance from camera to object was slightly dissimilar to account for focal length. He saved all files in H.265.

When comparing both cameras, Tom found that both cameras enjoyed best sharpness at 0 (neutral) and +1, while +3 was unusable for the Phantom 4 Pro. But the Phantom 4 Pro had less distortion than the Mavic 2 Pro.  Tom also found that an aperture setting of 5.6 was ideal on both drones for the best sharpness. Overall, the sharpness with the 1″ Hasselblad camera on the Mavic 2 Pro was less sharp, and more distorted. Tom does say that by applying a distortion filter to the Mavic Pro 2, in post, you can compensate somewhat for the distortion, but you’re also having to add a step to your workflow.

The Mavic 2 Pro also beats the Phantom 4 Pro with less noise. Tom concluded that the differences can be attributed to the processor, and what is a drag is that the new Hasselblad camera 1″ sensor only uses a fraction of that chip in D-Log HQ. Unfortunate, since the hallmark of the Mavic 2 Pro is that 1″ sensor.

Lastly, DJI’s field of view was looked at, and the Phantom 4 Pro offered the straighter image while the Mavic 2 Pro’s HQ mode started to slightly curve, while the FOV mode is practically fisheyed. FOV does offer comparable sharpness, however, so you’d have to add a step to straight out the image to make it usable in order to use FOV mode.

So at the end of the day, does that mean that the Phantom 4 Pro has a better camera than the Hasselblad of the Mavic 2 Pro. Well, it depends on what’s important to you.  If you go for sharpness and less distortion, you have to deal with working harder to dial in the color grade. But if you go with color, you’re going to have to take a few extra steps in post to get the kind of sharpness and detail you want.

So it’s really a toss up. What would you prefer? Leave a message in the comments below.

Drones 101: How to Crash Your Drone

By James DeRuvo (doddleNEWS) Although it’s gotten considerably easier since DJI launched the Phantom series, flying a drone can have a steep learning curve.  I’m not talking about remembering hand gestures, mind you, but learning […]