Getting a drone shot has become commonplace in our industry, but so has Federal and Local rules and regulations for flying them. In my city, I haven’t flown my drone in six months because in Southern California, city councils have basically banned them everywhere but about 20 miles away. So how can you get a cool drone shot when faced with all that red tape? How about faking one with Google Earth? 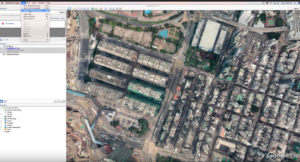 This tutorial comes from Youtuber Chung Dha, who uses Google Earth and Apple Quicktime Pro to screen record his navigation as he moves around the satellite interface. You’ll need paid licenses for both applications to make this work.

Choosing a city scape location, and then enabling Apple Quicktime, Chungda screen recorded his entire desktop while he moved around the scene. Chungda was even able to get a 3D bird’s eye view, rather than the facing down angle.

The key, however, is to navigate the Google Earth interface by slowly dragging around using your mouse, or using the arrow keys on your keyboard. There’s a few drawbacks of this technique, however, as the mouse cursor is easily seen on the screen, so the busier the landscape the better. Moreover, with the keyboard arrows, the change in direction can be abrupt.

Google Earth has its own navigation interfaces in the upper right hand corner and using that controller will give you a smoother change of direction.  To zoom in, you can select control/drag to zoom in/out, shift and drag to adjust the angle, and there’s also pan and tilt controls. 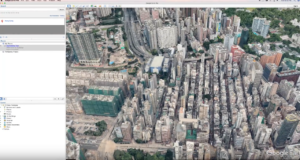 Chungda also says you don’t want to make your drone shot too wide because the focal length can betray how “fake” it looks, particularly from the angle. Users will also want to adjust shadows in the artificial shadow control, turning it off to get the  more natural shadow view.

In the end, you don’t want to get too creative with your control, much like actually flying a drone. The more “creative you get,” the difficult the shot can be to view. Smooth control with a lumbering movement will always make the shot more cinematic and natural. Also, think less is more. Use this for short shots, as the longer the drone shot lingers on the screen, the more likely the viewer may notice it’s a virtual based on satellite photos.

Lastly, you want to be sure that you have plenty of RAM, and all your programs closed to make as much memory available, otherwise the screen record may be a bit jittery.  Doing a partial screen recording will also minimize the amount of processor power and RAM you are using to make it smoother as well.

Once you’ve done recording, you can save the screen capture footage, where you can choose a resolution of up to the best resolution of your monitor. If you have a 5K iMac, for example, you can do a 5K screen recording. It if’s 1080p, you’ll top out there. Avoid using the export though, as Chung warns you’ll be limited by Quicktime to 1080p.

From there, all you need to do is import the footage into your NLE, adjust the screen area to avoid any distracting portions of your screen, and edit as normal. Is it perfect? No. But with a lot of time and finesse, you can certainly fake your  way through it. Just remember that less is more.

Oh, and Google also has “easter eggs” of the Moon and Mars. That’ll take a little more work to make legit, but it’s certainly fun to experiment with.

DJI Can Approve Commercial Drones in No Fly Zones

It looks like the FAA is farming out some of its authority over no-fly zones, by outsourcing to DJI to clear professional pilots to fly their drones within controlled airspace.  Though the Low Altitude Authorization […]