Every time that FiLMiC Pro comes out with another update, you wonder how far they can push the features to shoot video with the iPhone, and the latest update will allow you to shoot in 4K Log.

“Recently FiLMiC Pro sent out the beta version of what I consider the biggest update ever for this app. The interface is completely redesigned, but the best feature is that now we’re able to shoot with a Log/Flat picture profile. This is a huge deal, considering this is just a phone.” – Matteo Bertoli, filmmaker, Peta Pixel 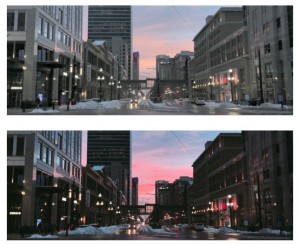 Ordinarily, shooting in Log would be the domain of cameras like the Sony FS7, Blackmagic URSA Mini, or the RED platform. But now the flat codec is being picked up by more mainstream cameras like the Panasonic GH5. But a mobile phone? In 4K? WOW.

You mayhave to shoot with an iPhone 7 to do it, but Log enables shooters to shoot in a flatter, low saturation and low contrast configuration. So when you color grade it, you can not only bring back the color and contrast, but also the details that have been recorded in light and shadow.

“From a colorist point of view this is huge and will also allow beginner filmmakers or cinematographers to experiment in post-production without spending a fortune for a camera.”

In order to add LOG, it looks like FiLMiC has once again rewritten the app from the ground up. The look is very similar to Sony’s SLog, according to filmmaker Matteo Bertoli, who says that when color correcting, you may need to crush the blacks in order to avoid noise, just like SLog 3.

Bertoli says that he shot a shot film with a BETA version of the app, and he believes that once it comes out of it, that the noise issue will improve. “What is sure,” Bertoli reminds, “is that you will notice way more noise shooting log on any camera.”

This will open up a lot of possibilities in post-production for more creative color grading, but again, the biggest advantage is that we’ll be able to capture those details in the shadows and in the highlights that would otherwise be lost.

After shooting the footage, you then use a look up table that will convert the Log codec into Rec 709. Or, you can adjust the color and contrast manually. According to AppCrawlr, there are dozens of color grading apps for the iPhone out there. I like VideoGrade [affiliate link to buy] because it has a slider setup and you can judge before and after with a sliding wall which enables you to have both windows active at the same time.

But it’ll likely be a while before it can support Log, if at all. There is also ExpressColor [link to buy], for the iPhone, that offers look up table quality color correcting into Rec 709, and you can export the data to a colorist for final color correction via email. But until they update to support the new features, you’ll have to output and grade with DaVinci Resolve or Premiere Pro’s expanded Color features, or some other utility on your desktop.

No word on when this version of FiLMiC Pro will come out of Beta, but the point is with this new update, I rather think mobile filmmakers are going to continue to dig it.

“If you’re a student filmmaker,” Bertoli concludes, “the app will let you experiment in post-production without spending a fortune for a camera.”