An article I was reading this morning offered some tips on how to buy your first camera, if you’re a beginning photographer. So I thought it would be a good idea to think about how these tips could apply to filmmakers. Whether you’re going with a mirrorless or DSLR, Canon, Nikon or Panasonic, GoPro or even a smartphone, there are plenty of things to consider when taking your first steps into a rapidly changing technological world of filmmaking.

The most common question that I usually see on groups from people is “what camera should I buy?” Well, let me stop here to tell you. These aren’t the best questions to make when starting photography, especially if you don’t know anything about it or how to use a camera. The initial question shouldn’t be about the camera (especially about brands, it should be about type of camera instead), but how to learn photography in the first place. – Alexandre Watanabe, FStoppers 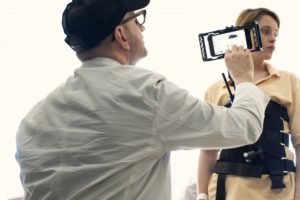 The first tip that Alexandre Watanabe offers is one that photography icon Ansel Adams said decades ago. The best camera is the one you have with you. Thinking about a smartphone in this digital era, Watanabe says using your mobile device to cut your teeth and learn the basics is a good way to get started.

It used to be that a DSLR or Mirrorless camera was the only way to learn how to shoot manually, and even manually focus to get the best depth of field. But that’s rapidly changing. With today’s smartphones, shooters enjoy a variety of the same camera features from apps that have manual controls and even Raw and Log recording. You can also add lenses through a system like Moment, and even an external microphone.

For a filmmaker, using your smartphone not only lets you get in touch with your inner Steven Soderbergh, but you can save a lot of money focusing on telling your story, not being obsessed with Gear Acquisition Syndrome.

But if you’re wanting just a bit more beef with a telephoto or zoom lens, then pocket size cameras have come a long way in the last ten years. Capable of even 4K video, and some offering external microphone jacks, a pocket camera is another lost cost option. The point is, using what you have, is a good way to learn the basics of photo composition, including the rule of thirds, lighting, exposure and more.

The other good option is an camcorder. While you won’t have the manual features of setting shutter speed and aperture setting on most, you can get one with an external microphone jack and you can use it to practice with. Not a bad option.

But if you’re intent on buying a DSLR or to go mirrorless, again, there’s a lot to think about. We’ve talked about the benefits of mirrorless and DSLRs already, As well as sensors (APS-C, Full Frame, etc.), External microphone port, pull out LCD screens, and other features. So let’s look at other features of your camera.

While you don’t have to have an external mic jack, it sure does make things easier when recording sound. But even the best DSLR usually has terrible preamps built in, so even an external mic jack will only get you so far. Granted, better than relying on the terrible microphones on the camera itself, but you’re probably better off connecting that mic to an external audio recorder like a Zoom H1.

Do you need to spend hundreds, or even thousands on additional lenses? Well, not right away. Going with a basic kit lens, like a 28-105 is a good, low cost option to cut your teeth on. But don’t sell the 50mm short. The “nifty fifty,” especially one that has a fast f1.8 or lower aperture rating, will give you some nice bokeh and focusing range, while letting you literally focus on your subject. Again, we’re talking about when just starting out. ‘

You also don’t have to rely with the more expensive name brand glass of the camera itself. Third party lenses, like SIGMA will give you more bang for your buck, and have the same quality performance as a Canon, Nikon or even Leica lens. Then there’s used lenses. With people making the switch to mirrorless, many are going to be listing their lenses on eBay, or the Facebook marketplace. So there are plenty of deals to be had for a good used camera and lens.

So as a beginner, slow down. Learn the basics of storytelling, image composition, and the basics of making a short film with your friends. And let the camera platform to grow as your skills do. Meanwhile, you can save up the money you will need to get the camera that you want.

Can FUJIFILM’s X-H1 Mirrorless Camera Compete with Sony and Panasonic?

By James DeRuvo (doddleNEWS) Lately I’ve been considering going Mirrorless. That Panasonic GH5S looks too damned impressive to ignore. Then there’s the Sony’s A7SIII, which is a low light beast that can practically see in […]