Update: Here’s a video from filmmaker John Brawley, who used his Pocket Cinema Camera 4K to show how well it works with skin tones. Very nice, I think!

It’s been nearly five months since Blackmagic announced the Pocket Cinema 4K at NAB. Since then, it’s been largely quiet about their new run and gun 4K cinema camera and it’s development. But now, we have our first look at the kind of footage it can deliver, and the result is pretty remarkable.

Since the clip above is on YouTube, you really don’t get the full effect of the quality of the video image. But luckily, BMD also put it up on their Vimeo channel. I would’ve embedded it, but the settings don’t allow for it. So here’s a direct link.

The film was made by filmmaker Mark Wyatt, who took to the forests of Canada to capture how the light hits different parts of the forest. Wyatt shot in RAW and armed his Pocket CineCam with a nice Sigma 18-35mm and Rokinon Cine 50mm prime lens, which were boosted by a Metabones Speedbooster for a little extra “umph.”

With stunning streaks emanating down from the forest canopy, it’s the ideal place to get an idea of how well the Pocket Cinema Camera captures its 13 stops of dynamic range.

There’s also a ton of details which the Pocket Cinema 4K picks up on, even in darkened shadows and bright ambient light.

“The camera tests I wanted to do were in the forests and waterfalls on the outer West Coast of Canada,” Wyatt said. “I was really interested in seeing how the new sensor would handle these harsh lighting conditions. By increasing the ISO to 1250 and 2500, it allowed me to capture the dark moss-lined walls and unique emerald color, yet also hold onto the highlight detail of the top of the waterfall and sky. I feel most cameras would likely struggle with this scene.”

Wyatt went on to say that while he only had a few days to shoot with the Pocket Cinema Camera 4K, he was left impressed with not only the image quality, but also how light weight the camera is.  “The weight of the camera is very liberating, especially when you are used to using larger camera systems,” Wyatt added. 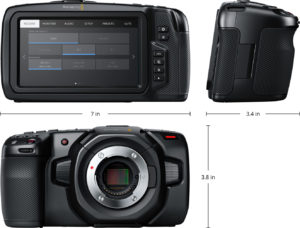 Wyatt went on to say that the large 5″ touch screen not only gives users a deft interface to navigate through the Camera OS, but also offers a sharp display with accurate color gamut. “The screen is big and bright enough to use in daylight, which I found great for judging focus and exposure,” Wyatt said. “And, the colors too on the screen, were also nicely represented. I would argue it is Blackmagic’s best screen yet.”

Cost of the Blackmagic Pocket Cinema Camera 4K is $1295 and it’s still on track to ship in September.

By Kevin P. McAuliffe In our previous lesson of learning BlackMagic Design’s DaVinci Resolve, we talked about the new Cut Panel inside of DaVinci Resolve 16, and how you can use it exponentially speed up your editing […]