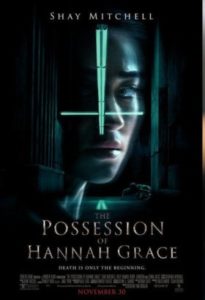 The very first feature film to use a full frame mirrorless camera as it’s main “A” camera is “The Possession Of Hannah Grace,” a new thriller set to his theaters this week. And while the film details the results of an exorcism that goes awry, the most stunning thing about the film may be how remarkable the image looks on screen.

“I knew that Sony’s A7S II had a full-frame sensor and could capture in 4K. And I knew that we had to make the film in a manner that would fit our schedule and budget…” – Executive producer Glenn S. Gainor

The filmmakers were looking for a camera platform that could perform best under the budget and production schedule that they were working with. In the end, executive producer Glenn Gainor went with the Sony α7SII, and to give the film a cinematic scale, shot with Vantage Hawk 65 lenses. “I had a relationship with Vantage,” Gainor said of the wide format lenses the film was shot on, “so we put it together and made a motion picture in a way that has never been done before.”

The film was shot using a set of six wide screen lenses ranging from 40mm to 95mm, and thanks to the 1.3x anamorphic squeeze of the Vantage Hawk 65 lenses, the camera captured at 1.40:1 widescreen, which enabled the entire image to be laid into the full frame sensor without losing anything. And since the $2200 camera was so affordable to use, the filmmakers were able to have dedicated camera bodies for each lens, thereby swapping out the camera setup with every shot and maintaining the digital emulsion and the resolution of their film. “We never had to wait for lens changes. I think the full-frame sensor is where the industry is going,” Gainor concludes. 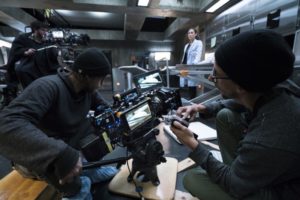 “If you work with a director who wants to shoot anamorphic, and we work with a producer who really wants to change the whole vision of how to shoot a cine movie, perfection is not the most interesting goal. It’s how you are telling the story and whether that works.” – Lennert Hillege, Director of Photography, The Possession of Hannah Grace

But while the low cost camera delivers a solidly affordable option for filming a feature, it doesn’t come without some challenges. DP Lennert Hillege says that the camera’s 8-bit compression would require some additional post processing. “It’s not like the conventional shooting we are used to with ALEXA,” Hillege says. “There are definitely limitations to be aware of, but the image is spectacular.”

Hillege says that in spite of that, the goal wasn’t to yield a perfect image. The main goal was to tell a compelling story, and do it under the budget you have. And thats’ where the α7SII delivered the goods.  “Given the trends in digital cameras and the importance of lenses,” Gainor added, “you could argue that this is the future of cinema.”