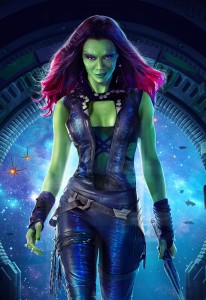 Avengers: Infinity War and the untitled Avengers 4 is looking to sport one of the biggest casts ever in a pair of feature films. Marvel Studios seems to be pulling out all the stops to fit in almost every superhero in the Marvel Cinematic Universe into these films.

Over at MTV News, the outlet interviewed Zoe Saldana at the Golden Globes on Sunday who confirmed that she will be reprising her role as Gamora in Infinity War. Here’s what she said:

“I don’t know when they’re going to let me read it. I’m not looking forward to the 5 hours of green make up, but every time I finally arrive on set I feel so happy and lucky to be there.”

Another interesting piece of news about actors reprising their roles comes from Scottish paper Daily Record UK (via MCUExchange) which reported the following:

Liv Tyler hasn’t been seen in a Marvel film since the 2008’s The Incredible Hulk, which she co-starred with Edward Norton, who has since been replaced with Mark Ruffalo. This wouldn’t be the first time an actor from that film has recently resurfaced, with William Hurt showing up as Secretary of State Thaddeus Ross in Captain America: Civil War. Still, there’s no proof that this is a legitimate scoop or if it is an error/typo, so take that casting news with a grain of salt.

Recently, the news hit the internet that Tom Holland, who plays Spider-Man, may not be in Avengers: Infinity War. That report was based on a casting call from a blog called Disney Casting Calls, which listed practically every actor in the MCU — except Holland — as appearing in the film. However, as we reported earlier, in a recent interview with Italian magazine L’Uomo Vogue, Holland confirmed he will indeed be part of Infinity War. Here’s what he said (via ComicBook.com):

“The approval for the role in Spider-Man arrives personally also by Robert Downey Jr. and Chris Evans ‘They who convinced the Marvel: the producers wanted to be sure that I was the right person before entrusting three films over the next four years, including Avengers: Infinity War.”

Ever since the question of Holland appearing in the film came up, I’ve wondered how that could be. Marvel went through a lot of negotiations with Sony just to be able to put the character in their films, so it always struck me as strange that he would be the only one left out of Infinity War.

Avengers: Infinity War will premiere in theaters on May 4, 2018.