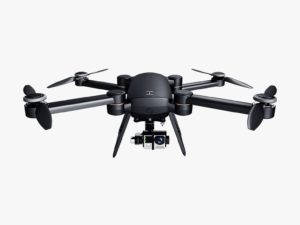 DJI and GoPro. GoPro and DJI. When it comes to drones, those two names tend to suck up all the air in the room. But GDU is back to grab their piece of the UAV pie with a cool new sliding arm drone design that could once again change the game.

“Drones are quickly becoming mainstream, but even with some new releases, no drone before this has really hit that perfect mark of being more competitively priced and easy to use without sacrificing quality and functionality. The new GDU O2 is versatile enough to appeal to both newbies and experienced users alike.” – Nicolia Wiles, GDU’s director of digital

You may not recognize the name, but GDU used to be called ProDrone, and they created the world’s first drone with collapsible rotor arms. That drone, the GDU Byrd, is a workhorse thanks to a modular design that is capable of carrying everything from a DSLR to a GoPro and still collapse into a backpack. I’ve flown it and the Byrd has tremendous potential for commercial drone applications like inspection, agriculture, and of course, filmmaking.

But GDU is back with a new, Mavic style drone that appeals to the mainstream drone pilot who wants to capture those selfie moments, and is even more compact with a new sliding arm design. Dubbed the GDU O2, is designed to also house the drone controller when not in use for an easy to carry package. The drone has all the usual navigational refinements including on board location sensors, obstacle avoidance, and a visual navigation system.

The new rotor arm design sides the motors into the inside of the body, for greater protection during transport without sacrificing stability. The arms are made out of aircraft grade aluminum, as you would expect, and offers both protection in the event of a drone crash while still being lightweight to carry in a backpack or purse. The O2 has enjoys a modest flight envelop of 20 minutes, with a video downlink range of up to one kilometer without any additional receiver or equipment to boost the signal.

Camera wise, the O2 enjoys a fully stabilized 4K camera which has 3 axis stabilization that doesn’t make compromises to insure form factor. It that offers camera modes that include follow-me, orbiting, vertical burst, selfie mode, and gesture identification. To take a selfie, one only need to give the “peace sign,” and the O2 will capture the moment. Orbiting mode is accomplished as the stereo visual sensors detect the target and circle around it, keeping the camera locked on the subject, and the cool new Vertical burst mode will take off like a rocket at 3 m/s while shooting multiple images from the faced down camera. There’s also time lapse and slow mo options.

I like what I’m seeing with the GDU O2.  Its sliding arm compact design, along with the ability to house the controller underneath it makes it compact enough for easy transport, while giving it the ability to deploy in seconds. That means you can capture your shot without compromising safety or image quality. If given the chance to gain some momentum, I think it can easily compete with both the Mavic Pro and GoPro Karma. “It’s not a Mavic killer and it’s not meant to be,” says the GDU O2 press release, “but rather like the car industry, the drone industry needs better options. The GDU O2 is a seriously good go-to option for the everyday drone.”

The GDU O2 is available for preorder for an MSRP of $732 and that comes with an additional battery and backpack. It’ll ship in October.