Star Wars has had a bit of a rough creative ride ever since Disney bought Lucasfilm. Rogue One and all three films of the saga trilogy have been delayed from their May release dates to December including the forthcoming untitled Star Wars: Episode IX. The only film to make its release date is Solo: A Star Wars Story and even that film lost its original directors and was replaced with Ron Howard.

We got our first look at Solo fairly recently and despite all of the creative shuffling behind the scenes, it looked fantastic. Lucasfilm has now released their final full trailer for the film and you can see it here and below:

And check out the new poster too! 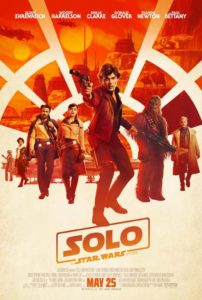 The big question that this film needs to address is whether Alden Ehrenreich can take over for Harrison Ford. He wasn’t given much to say in the first trailer but here he’s given a lot more and I have to say — I’m digging his take on a young Han Solo. I can honestly see the possible seeds for the more world-weary scruffy nerfherder planted here. His reaction to Chewbacca’s age was pitch perfect for a younger version of Han.

I really need to point out that the tone of this film is the least Star Wars-ish we’ve ever experienced. No Rebels vs. the Empire here and it has a very, very heist like vibe. Even the music kicks off with a palm-muted guitar is almost jarringly out of place. And I like it. It means that Lucasfilm is ready to start pushing what Star Wars is.

There are also a lot of hints to legendary feats of the smugglers past. We have seen part of the famous game where Solo wins the Millennium Falcon from Lando Calrissian and quite possibly the Kessel Run. There’s also a brief series of shots at the beginning of the trailer where a Star Destroyer is being built on his home world of Corellia that dovetails into this quote from the smuggler in Star Wars: A New Hope, “I’ve outrun Imperial starships, not the local bulk-cruisers, mind you. I’m talking about the big Corellian ships now.”

I will say that nothing in this trailer gives me goosebumps or ignites my nostalgic love for the franchise but we’re already three movies into this new generation of Star Wars movies. Whether it’s because I know the history and issues of the making of this movie or whether I’ve just gotten used to Star Wars films being released every year — I don’t know. But I’d be lying if I said that the trailer makes the film feel like a hell of a lot of fun.

Solo: A Star Wars Story will premiere in theaters on on May 25, 2018. Here’s the synopsis:

Board the Millennium Falcon and journey to a galaxy far, far away in Solo: A Star Wars Story, an all-new adventure with the most beloved scoundrel in the galaxy. Through a series of daring escapades deep within a dark and dangerous criminal underworld, Han Solo meets his mighty future copilot Chewbacca and encounters the notorious gambler Lando Calrissian, in a journey that will set the course of one of the Star Wars saga’s most unlikely heroes.