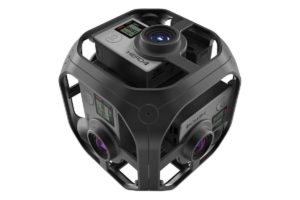 GoPro has started a pilot program for their new 5.2K GoPro Fusion 360˚ action camera and almost immediately it had over 20,000 creators, brands and organizations (including yours truly) sign up to one of the lucky few to try out the new camera. Now the cameras are shipping and it won’t be long before we see the results!

From international brands pushing the envelope in immersive content experiences, to award-winning production agencies and an influential travel vlogger who continue to redefine storytelling, these partners will help showcase the broad potential of Fusion as not just the 360° camera you expect from GoPro, but as a capture device capable of showcasing creative expression in ways never before imagined. – The Inside Line at GoPro.com

These days, 360˚ cameras are an expensive dime a dozen. But what makes the GoPro Fusion stand out from the others is that the action camera design can record in the round at 5.2K and has a feature called “OverCapture,” which allows shooters to “punch out” a 2D clip in 1080p from the spherical video taken and use it. So you can record 360, and then find the best possible angle from the spherical spectrum of your scene and then grab that for your edit. It’s a fantastic feature.   “Not just a VR capture solution, Fusion ensures that traditional content creators will get the shot, while also capturing the unexpected,” the press release added.

So far, the Fusion has only gone out to major band names including AccuWeather, Digital Domain, FOX Sports, Getty Images, the Golden State Warriors, Legend 3D, Louie Cole (FunForLouie), RapidVR, RYOT, and USA Today. The first wave of Fusion cameras was specifically reserved to this group because of they represent talent that aggressively pursues the use of spherical and 360 degree cameras for content creation.  The group represents a wide array of news, weather and sports, as well as immersive story telling mediums such as Digital Domain and Rapid VR. Fox Sports, in particular, has been aggressively testing VR content since 2015, along with drone based and 8K cameras.

But GoPro promises to expand the program to regular users as time goes on.  “This is just the beginning, and we’re not limiting ourselves to major names,” the press release reads. “Throughout the summer, we’ll continue to forge more pilot partnerships with brands and creators, as we set out to demonstrate the versatility, durability, and quality of GoPro Fusion in an expanded variety of use cases.”

“We are excited to get Fusion into the hands of creative professionals, both to see the content they create and also to receive feedback that helps us refine the overall user experience for when we launch Fusion to a broader audience later this year.” – Nick Woodman, CEO GoPro

And while there’s a vast list of content creators waiting in line to get their hands on Fusion, GoPro continues to keep the application process open, with plans to add more pilot partners as the summer goes on. To apply to become a pilot partner, visit https://gopro.com/fusion.  By the end of 2017, a limited commercial release of Fusion is expected.

by James DeRuvo The holidays are here and with it, comes our annual holiday wish list/gift guide, to give you some ideas of what to get your favorite independent filmmaker!  We’ve already done the wish […]

Hot Wheels and FortNite Could Be Serious Cinematic Tools for PreViz

By James DeRuvo (doddleNEWS) Fun, Games and Filmmaking!  I wouldn’t ordinarily write about a toy car, but since it can help with PreViz, and since this thing uses a GoPro, I figured, what the hell?! […]

By James DeRuvo (doddleNEWS) doddleTALKS Tech host James DeRuvo goes to CineGear 2013, and gets an in depth interview with Radiant Images co-founder Michael Mansouri, who talks about the latest Novo 2K camera and other […]