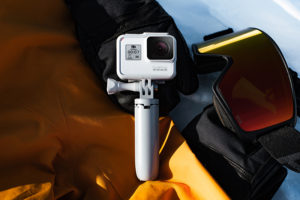 UPDATE: GoPro is now making a limited edition ColorWay version of the Hero7 Black, available in “Dusk White.” Same camera, same hyper smooth stabilization, but prettier! It also looks like in the future you’ll be able to wrap it in yellow, blue, white, red, black and pink silicon sleeves to shake things up a bit.

Boldly declaring that “shaky video is dead,” GoPro proclaimed the release of their next generation GoPro Hero7 Black 4K action camera. With a new stand out feature called “HyperSmooth” video, the in camera stabilization promises gimbal like performance without the extra expense of another piece of gear. But that isn’t all that this plucky action camera can do.

“HERO7 Black is the GoPro we’ve all been waiting for,” said GoPro founder, Nick Woodman. “With HyperSmooth video stabilization, HERO7 Black is a camera anyone can use to capture amazingly smooth, professional looking shots of their favorite activities. And they can do it live.”

The main feature of the new Hero7 Black is HyperSmooth, which GoPro says is the best in-camera video stabilization ever featured in any camera. GoPro introduced in camera stabilization last year with the Hero6, but clearly has refined in-camera video stabilization, culminating with HyperSmooth. This new feature digitally dampens out high shock and windy conditions, without artifacting or dropping frames.  It’s almost like hyperlapse, but in real time. Check out this video which compares the Hero7 Black with previous GoPro models:

The video footage is impressively smooth, by contrast, but I have a hunch that GoPro tested the Hero7 against a Hero camera before the Hero6 in order to get a more pronounced comparison. Perhaps a Hero5 or Hero4?  Anyway, it’s still impressive.

“I’ve had it for a couple of weeks; it is by far the best device they’ve ever mad,” tweeted Casey Neistat this morning. “I have used it in nearly every video i’ve posted over the last couple weeks and it’s hard to distinguish from my SLR footage.” 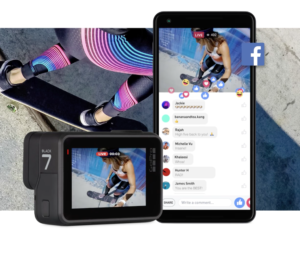 But the feature I’m excited about is that GoPro can now share the action with live streaming to Facebook, YouTube, Vimeo, and even Twitch. And for the first time, you can do it directly from the GoPro app. No extra app or hardware required. Meanwhile, your GoPro saves your video footage in HD to the miniSD card as it does.

Other features of the Hero 7 Black include:

The $399 HERO7 Black is available for pre-order on Sept. 20 at GoPro.com. GoPro is also offering the Hero 7 Silver, and Hero7 White for $299 and $199 respectively. But neither the silver or white editions  come with HyperSmooth, live streaming, and they only take 10MP stills.  Shipping for all three models will start internationally beginning Sept. 27, and in the U.S. on Sept. 30.

By James DeRuvo (doddleNEWS) Have you ever seen those cool clips from a GoPro footage and thought … “why doesn’t my GoPro footage look like that?” Well, it’s not because you don’t have the tools. […]

By James DeRuvo (doddleNEWS) Remember the Flip Camcorder? Cisco bought the company back in 2009, and then, less than a year later, they shuttered the entire division, citing the massive popularity of the iPhone. Nikon seems to be […]

By James DeRuvo (doddleNEWS) It wouldn’t be NAB without a quick chat with the guys at GoPro. And this year, they’ve got some sweet new products including the GoPro Dual 3D System and a clever […]