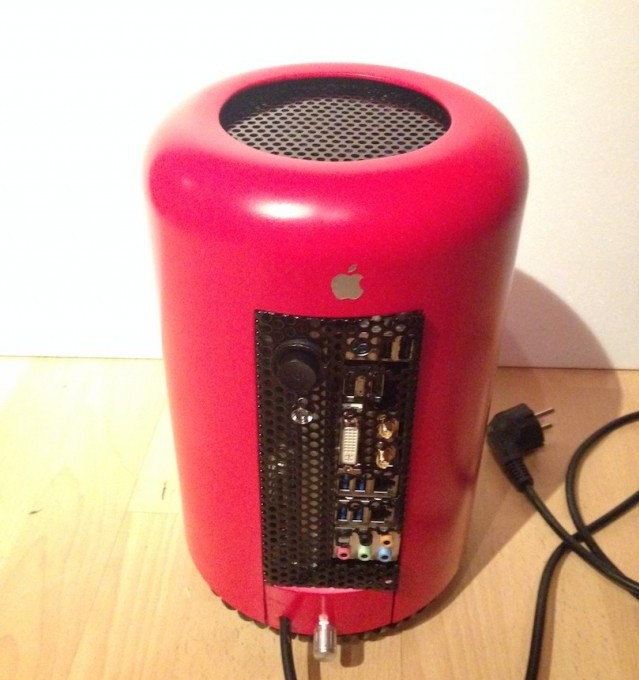 Remember the story a few weeks ago about how it would likely be impossible, or at least cost prohibitive, to build your own Mac Pro? Most of that is because it would likely cost more to buy each part and build on your own rig, than just buying the Cylinder itself. But factoring that out, could you build a Mac Pro that looks identical to the Apple’s new professional-grade rig? It’s already been done, and it looks darn close.

I am NOT the builder of this mod … All credit goes to the user “sascha288”, he is the owner and builder of that case.  The mod/case is based on (yes) a trashcan … – Dschijn, TonyMacx86 Forums 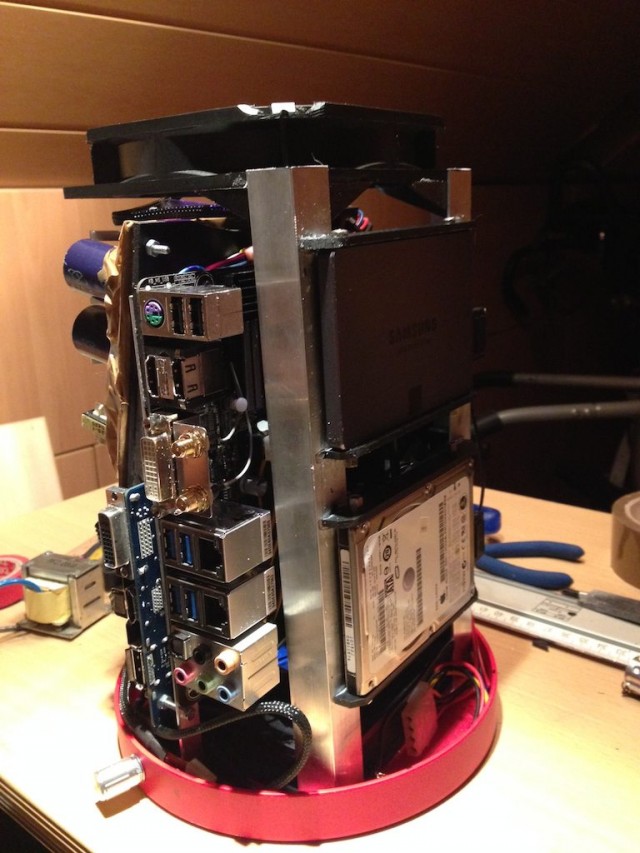 The creator of the “Trashcan Mac Pro” is a German Mac enthusiast, who made the case from an Authentics 1200614 Bad-Abfalleimer LUNAR trashcan, which is listed on Amazon’s German site. And no, don’t bother, it’s not available here in the US.

Inside it, he built a PC rig using an Intel Core i3 Haswell processor — I know, that’s a slug compared to a Xenon and it doesn’t have the FirePro GPUs, but bear with me here — along with Radeon 7750 Video cards, an SSD and spinning hard drive, Gigabyte z87n WiFi, and an ATX power supply.

All were fitted onto small ATX motherboard with Corsair XMS3 DDR memory. The motherboard looks heavily modified with CPU on one side and RAM and hard drive on the other in a sandwich configuration. There’s a fan over the heat sync for i3 Haswell processor and mounted sideways.

The Lunar trashcan itself was then modified to look more like the Mac Pro, even with ribs along the bottom, encircled around the fan operating on the bottom of the trashcan case and pushing air up through the central core of the can to mimic the Mac Pro’s central air flow as much as possible.

Ports include dual Ethernet, four USB connectors, twin HDMI and DVI-D video connectors, and even a pair of coaxial connectors, which I presume are for a capture card. He even managed to reconnect the onboard sound card.

Now the downside is that while most of the computer itself is kept nice and cool, the idle chipset temperature is most definitely in the red at 127°C. But that could be because he used a lower CFM fan over the heat sync itself. Also, much of the air could also be going out of the back side aluminum panel which is littered with holes. Going with a solid piece could force all the air to run up through the central core and create a venturi affect that could make the cooling of the CPU more efficient.

But all things considered, with the flashy candy apple red paint job and even a clever Apple Logo, it could look like an actual Mac Pro from a distance, although the benchmarks will surely differ to be sure.

The point is, that the concept of a home built Mac Pro is more or less proven, and will surely fire up the imagination of other Hackintosh enthusiasts to perfect it. And who knows what chips they can get to work in a Hackintosh to get there? I’m betting we see more of these in the future. And $53 for the trashcan, why not?