There’s a great rule of thumb which is that it doesn’t matter how bad your film looks, as long as it sounds great. While I never go quite that far (I am a visual person, after all), there’s a definite kernel of truth to it.

With that in mind Hammer & Anvil has released a new line-up of audio equipment for the HDSLR market. The products look very affordable prices and these new models from H&A are great for use in studio or location recording, digital scribing, multimedia integration or even casual home use. The products are available now on Adorama’s website or, if you live in New York, at their superstore on 42 West 18th Street. Here’s a list of the new products: 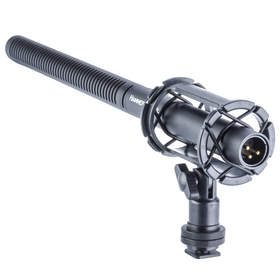 H&A Professional Supercardioid Shotgun Microphone (HAAMKENG600)
This is a 15-inch long shotgun mic with a supercardioid polar pickup pattern for narrow pick-up field. It’s your standard tool for capturing clear dialog in broadcast and narrative as well as for theater.

The mic can be powered with a single AA battery instead of phantom power which will allow you to easily plug it into the mini-jacks available on most DSLRs. It also comes with a shock mount that can be threaded into a standard 1/4″-20 thread for grip. The mic retails for $139.95 and is available here. 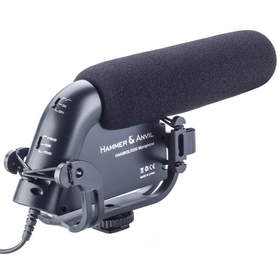 H&A Camera Mounted Shotgun Microphone (HAAMKSLR300) and Directional Condenser Microphone (HAAMKSLR100)
Similar to the 600 series but at a much shorter 8.6-inch length. The 300 also uses a supercardioid polar pickup pattern for narrow pick-up field but comes with and integrated floating shock-mount which stabilizes the mic to any accessory shoe. It also grips with a standard 1/4″-20 thread in case you don’t want to mount it directly to the camera. The Camera Mounted Shotgun Microphone runs on a single 9V battery which should give you about 100 hours of use and comes with both a foam windscreen and “dead kitten” windshield. The package will run for $110.00 and is available here.

Hammer & Anvil also have a directional condenser microphone that mounts onto a camera’s hot shoe. The 100 incorporates a shock mount and is also comes with a foam windscreen and a “dead kitten” cover like the 300. This mic retails for $39.95 and is available online here. 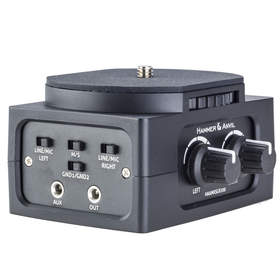 H&A Two Channel Audio Mixers (HAAMXSLR100 and HAAMXSLR200)
If you’re like me and you have a serious distrust of running long mini-jack cables (for good reason) and would like to capture more than one audio signal simultaneously then you’ll want want to look at the HAAMXSLR200. It features two balanced XLR inputs as well as an AUX mini-jack input and two trim control knobs to mix the signals. The mixer uses passive circuitry so no batteries or power source is required meaning you’ll have to supply a battery when using it with a shotgun mic. The cheaper HAAMXSLR100 has one stereo mini-jack input or two mono mini-jacks instead of XLR so I would only suggest it if you’re using a wireless system. The HAAMXSLR100 is available for $69.95 here while the HAAMXSLR200 retails for $119.95 and is available here.

About Hammer & Anvil
Hammer & Anvil audio production tools are on the forefront of the HDSLR video revolution, offering mics, mixers and audio tools with the smallest possible footprint and maximum function. Engineered for the cinematographer on the go, Hammer & Anvil equipment can make a good production into a spectacular production by giving filmmakers accessible ways to harness the nuance of sound and timbre to evoke emotion, set the scene and enhance dialog and action.

Hammer & Anvil is only available at Adorama, the leading retailer for professional photography, video and audio equipment.