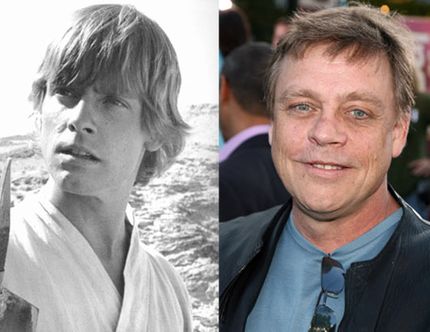 (Editor’s note: This was one our most popular stories, and since it’s Mark Hamill’s birthday, we wanted to share it with you!)

Mark Hamill was only 25 when he swung his first light saber, and some would say that it was the highlight of his career. The Jedi turns 63, making that 183 in Hollywood years. It’s hard to believe the young man that took on the voice of James Earl Jones, and lived, carries around an AARP card.

It’s funny when people a generation or two behind mine (I was blessed to slide in at the tail-end of Gen X) consider Hamill’s greatest role as either the voice of Joker on Batman or possibly Cocknocker in Jay and Silent Bob Strike Back. He may have never gained the fame of Han or the infamy of Leia, but I don’t think Hamill has done too badly for himself.

While I’m a Star Wars fan, Hamill will forever be Col. Christopher Blair from the incredibly successful, and once cutting edge, Wing Commander series of video games. I still have them and occasionally bring them out on my original Playstation. He also made an impression in “The Guyver,” but it’s hard to outshine Jimmy Walker and his signature “Dynomite.” I hope you can sense the sarcasm there.

The reality is we have heard much more of Mark Hamill than seen over the years. Old Luke may have a face for radio, but he’s lent his voice to several video games and cartoons over the years. Anyone that’s watched “My Friends Tigger and Pooh” on Disney…just admit you watched it…heard him as the voice of Turtle.

Even I was surprised when I found out he voices Fire Lord Ozao in the “Avatar: The Last Airbender” cartoon. Recently, my children and I finally watched the series, and not once did I even think about Hamill as Ozai. In fact, children today have heard more of Mark Hamill than any of my or subsequent generations ever have.

Hamill may not be able to swing a light saber like he used to, but I hear they make pills for that. Many may consider Hamill’s career to have gone downhill since his days as a Jedi, but for any actor to stay busy into his 60s is definitely an accomplishment. He may not have a list of blockbuster movies under his belt, except filming Star Wars: Episode VII for director JJ Abrams, but it’s obvious that he hasn’t let his one iconic character define him. Happy birthday, Luke Skywalker, may the Hoveround be with you.

By Danny F. Santos (doddleNEWS) I’ve never been a big fan of classic Disney films. Outside of some of their weirder movies like Tron and Honey, I Shrunk the Kids there haven’t been many movies […]

By Danny F. Santos (doddleNEWS) We got a trio of really cool news prepared for you today! Past, present, and future are well represented with stories on Star Wars, Lost in Space, and Warner Bros. […]