Fun, Games and Filmmaking!  I wouldn’t ordinarily write about a toy car, but since it can help with PreViz, and since this thing uses a GoPro, I figured, what the hell?! Besides, it’s Friday, and I don’t have a Friday Funny to end the week with!

Made by Hot Wheels, the Experimotors Zoom In car is really more oaf a camera platform with tiny wheels. It’s capable of housing a GoPro Hero Session or Hero 5 Session and can give a first person point of view of what a tiny driver would see barreling down a Hot Wheels track. And the best part is, it’s only a buck.

Check out the Zoom In in action: 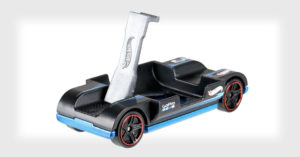 What I can see this being beneficial for, other than the kitchy youtube novelty of it, is when creating camera angles in the early stages of set design, where the art director has built a foam board version for your approval. Take the Zoom In, and you can use it to run zooms as a kind of live action animatic and start seeing the angles and determining whether the design works or needs to be adjusted early. That saves a ton of time.

Or, you can just stick it on a Hot Wheels track and play “Land of the Giants” car chase edition!

Now the downside is, that GoPro has discontinued the camera, so you’ll have to pick one up either before the supplies dwindle, or used.  But if you have one already, there’s a great extra use for it.  Consider the possibilities! 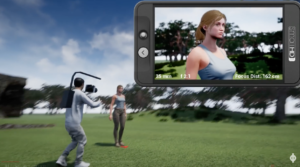 Meanwhile, as we’re talking about toys and games and filmmaking, there’s a filmmaker on YouTube that is using the gaming engine of FortNite to create a kind of virtual pre-viz animatic.

Matt Workman, of Cinematography Database has been playing the game and he noticed that you can build virtual set pieces in the game much like MineCraft, only far less pixilated. So he’s using that engine to create a pre-viz utility called CineGame.

So far, with CineGame, users can build walls, stairs, doors and windows. “It’s fun to run around and building sets at night and I don’t know of a faster way to build and layout sets, and then photograph them,” Workman says in his videos. In several other videos he’s managed to show how you can  various props and set pieces. Then he spent more time on it and can now add a virtual actor, a virtual camera and cinematographer, along with a built in monitor to show the camera viewpoint.

Workman has managed to program the virtual actor to work with camera blocking, by laying down virtual “T” points and programming the actor to walk to it. He can even have it walk around a preprogrammed course motion control style, and he’s planning on adding multiple actors in order to have them interact.

For a previz utility that’s free and available with FortNite, you can work on your film, and then blow off some steam later playing. I can’t wait to see where this goes.

UPDATE: Workman has managed to get a long way, adding exposure settings, set pieces, and better interaction.  You can even view full camera view, and even photograph it.

Foll0w along by subscribing to his YouTube channel here.

Photographer Sparks Debate Over the Value of ISO

We’ve been hearing about ISO since the film days (when it was called ASA). Since it refers to the speed at which film, or an image sensor gathers the light that shines to it, ISO […]

GoPro has had its head down over the last year, focusing on returning to profitability by trimming staff and the number of products it features. The result has been promising, as the company returned to […]