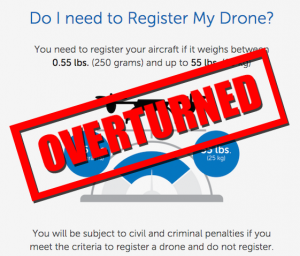 WOW. I have to say I didn’t see this coming, and honestly, I’m not sure I’m all that thrilled about the appeals court’s decision to overturn FAA drone registration. I’m all for the freedom to fly your drone wherever the winds take you, but to overturn the 2015 FAA Rules that required unmanned aerial vehicles to be registered in order to do it, isn’t my idea of jurisprudence.

The case came from RC hobbyist John A. Taylor, an insurance lawyer who believed that the FAA’s registration requiring amounted to a clear statutory prohibition that violated the separation of powers. The Federal Appeals Court of the District of Columbia agreed, saying that Congress had “weighed in” on the issue of drone regulation, by passing a statute that supported the FAA’s long standing ‘hands off’ approach towards the regulation of radio controlled aircraft, of which drones would be a part.

“As of today, no American has been seriously injured by hobby drones. They may get cuts or bruises, but look at ATVs and watercraft, where dozens are killed every year. It’s all a reaction to new technology. People are afraid of drones because they’re something new.” – John A. Taylor, RC hobbyist and attorney to Market Watch

In reaching the decision, the Appeals Court has effectively overturned the central core of the FAA Drone Registration rule that would require any drone from .55 to 55 pounds, for consumer or hobby purposes, to be registered. Registration cost $5 and was required to be updated every three years, with penalties including three years in prison and a $250,000 fine for failure to comply.

As of March 2017, the FAA estimates that over  800,000 drones have been registered. The registration rules also require the drone registry number be prominently displayed on the drone itself, and could be applied to every done a pilot owns.

“We are carefully reviewing the US Court of Appeals decision as it relates to drone registrations. The FAA put registration and operational regulations in place to ensure that drones are operated in a way that is safe and does not pose security and privacy threats. We are in the process of considering our options and response to the decision.” – The FAA in a prepared statement

Now, with the ruling vacating the drone registration requirement, the question remains whether that data will be expunged. According to the ruling, the FAA has a week to decide whether to appeal to a higher court.

“We should know in the next couple of weeks how the U.S. government plans to implement the Court’s decision, if it decides not to appeal,” says Aviation attorney Loretta Alkalay, speculating on whether the FAA would appeal to the U.S. Supreme Court. However, Alkalay says that it is unlikely SCOTUS will grant the request.

The Drone Manufacturer’s Alliance, of which DJI is a founding member, weighed in on the decision.

“The Drone Registration System has worked well to protect the interests of safe and responsible pilots as well as the interests of society at large,” the DMA said in a statement. “We hope all sides see the benefit of a reasonable and minimally restrictive form of basic regulation that has helped make drone operations in America overwhelmingly safe. We look forward to working with policymakers on a long-term legislative solution.”

Based on their response, it looks like the DMA isn’t popping any champaign corks on the decision, and is taking a wait and see attitude on how the FAA responds.

Honestly, I don’t understand what the big deal is. As both a drone and private pilot, I understand that even experimental, amateur built aircraft require registration. A drone traveling at speed or plummeting from altitude can do some serious damage, so requiring a means by which to find out who owns and operates the drone was in the public’ sector best interest.

The ruling affects only hobbyists, however, and does not apply to Part 107 for commercial drone flight use.