We’ve known for awhile now, that Facebook was going to make a serious move on YouTube. Not just with live streaming video or by poaching unhappy content creators. The social media giant, who also owns Instagram, has been experimenting with vertical video and is now launching IGTV.

Today, we have two big announcements to share. First, Instagram is now a global community of one billion! Since our launch in 2010, we’ve watched with amazement as the community has flourished and grown. This is a major accomplishment — so from all of us at Instagram, thank you! Second, we’re announcing our most exciting feature to date: IGTV, a new app for watching long-form, vertical video from your favorite Instagram creators. – Kevin Systrom, Co-Founder & CEO Instagram

The first part if Instagram’s new is pretty huge all by itself, as the social media content app now enjoy over 1 billion worldwide users, thanks to it’s association with parent company Facebook. Now they can take that considerable clout and go head to head with YouTube with IGTV.

The basics are that IGTV will be a longer form version of Instagram, and will initially focus on the content you follow. Built around the mobile platform, IGTV will primarily focus on vertical videos that are common in Instagram stories, except that with IGTV, content creators will be able to post videos that are up to 60 minutes long.

But there’s two features of the new service I already HATE. First, it’s vertical video format. I get that it’s designed for the mobile platform, but the vertical video aspect ratio locks a creator into that one art form. Whereas, with the standard 16:9 or even 4:3 horizontal format, users can have more options for sharing their work. I think the guys from Glove and Boots said it best in this video … 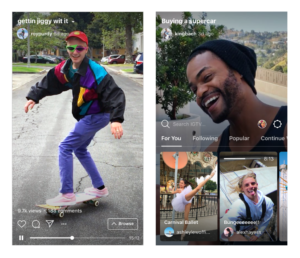 Second, it contains an autoplay feature. “Just like turning on the TV, IGTV starts playing as soon as you open the app,” writes Kevin Systrom, Co-Founder & CEO. “You don’t have to search to start watching content from people you already follow on Instagram and others you might like based on your interests.”

I simply cannot stand autoplay videos because they are a huge drain on data caps. Sure, you can turn the feature off in instagram by disabling play over cellular, but that’s limiting as well.  Again, I get what they’re trying to do, they’re trying to create a mobile TV network where any content creator can have their own channel, endusers just have to swipe up to get to their next content they follow. And it has the added component of audience engagement with like, comment and send videos directly to friends. But if I want to watch something I can just hit play, can’t I? So please, Facebook, enough with the autoplay nonsense.

IGTV will be rolling out to both Android and iOS in the coming weeks. And while IGTV will have its own app, but Systrom says that Instagram users will also have long form IGTV content available, so you don’t have to double up on the apps to get the content you want.

Update: It’s possible that DeFranco is looking to wean himself off of relying on YouTube. He’s partnered with social media developer Snakt to create DeFranco Now, a media distribution platform that will not only showcase […]

by Larry Jordan Last Tuesday, Adobe announced a brand new product: Project Rush. This new video app is focused on two areas where Adobe has not been strong: video editing on mobile devices and social […]

By James DeRuvo (doddleNEWS) Three years after waging one of the most successful crowdfunding campaigns on Kickstarter, and one year after getting a boost by Facebook buying them, Oculus unveiled the final design for their […]