It appears that there’s some serious pushback brewing over Google Glass. First, there was talk that various bars and restaurants where banning any patron who chose to wear Google’s $1500 wearable computer glasses, and now it seems there’s a site that seeks to fight Google’s “algorithmic future one bit at a time.” So, the revolution will not be televised, it’ll be online.

Stop The Cyborgs’ was founded in response to the Google Glass project and other technology trends. The aim of the movement is to stop a future in which privacy is impossible and corporate control total. – Stop the Cyborgs Website

Why is it that people are rebelling against Google’s hipster wearable computer glasses? Privacy seems to be the main concern. According to Cyborg’s site, the problem with Google’s Glass project is that people can’t tell if they’re being recorded or having their picture taken. “This is in contrast to a smart phone where the user must visibly hold the camera up to take a picture or record video,” says the site. “We must therefore assume that we are being recorded at all times (and possibly publicly broadcast) from a low angle where ones face is clearly visible.”

And based on this youtube parody, they may have a point: 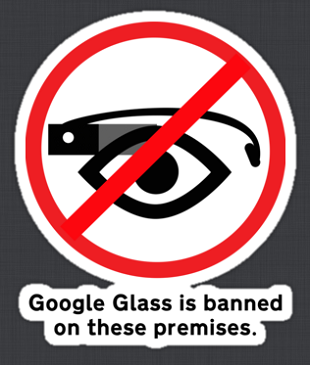 Kinda creepy, huh? And additionally, the use of such a device is the advantage it gives the wearer in looking up details and socially there are tons of faux pas waiting to be made. My wife already gets ignored if I reach for the iPhone to look something up or check my email. Having these one all the time, she’ll never ever know if I’m really paying attention to her or not. So, socially, they may be ideal for the Sheldon Cooper’s of the world — bazinga! — but for the real world, they’re a disaster in the making.

Establishments like bars are already starting to say “no thanks” to Sergei Brin and his Project Glass concept.  The 5 Pointe Café in Seattle grabbed headlines last week as the first bar to preemptively ban the use of Google Glass on premises. “For the record, The 5 Point is the first Seattle business to ban in advance Google Glasses,” the bar stated proudly to the media. “And ass kickings will be encouraged for violators.” But let’s be honest, they’re just using the snafu over Glass as a marketing ploy to get their name out in the media. And it worked, too; their Facebook Page has already gotten hundreds of  likes and generated some interesting comments.

Then there’s the potential danger that comes with having augmented reality distracting your attention to the point that you end up running into people and things. We’ve already had people so engrossed in their smartphones, that they walked into mall water fountains and dropped down into manholes. Being completely wired could cause even more car accidents than people texting while driving.

If Google Glass looks no different when recording than when dormant, there will be many challenges. Conversations will be recorded. Even when they’re not being recorded, people will be uncomfortable talking to those with their Google Glass on their face. Fights will break out. – FaceI

But the more serious issue is privacy. Since you never know if someone is taking pictures of you, they would walk right up to you and mistakenly claim you’re someone else, get your picture and then use Google to find out too much about you. One site, called TechI says that Google should be forced to add a camera light which would let the other person on the other side of the Glass know when it’s in use, especially to take a picture of video clip, or even recording a conversation. 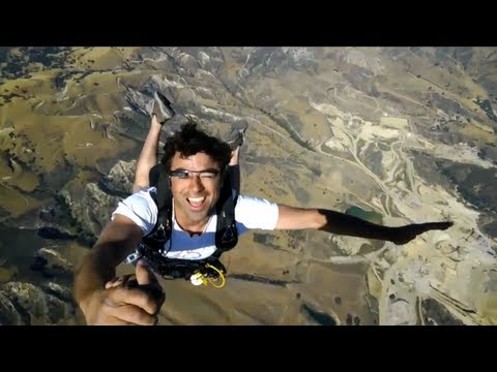 But here’s the thing.  Is it someone that really needs to be banned?  I have  a hunch that privacy and safety concerns aside, the real thing that’s going to put Project Glass in jeopardy is it’s obscene $1500 price tag, and the fact that location based popup advertising will drive people absolutely NUTS throughout the day. Brin may think that the third person perspective is great while driving or skydiving, but at the end of the day, it’s just way too  outside the box for mainstream users to adopt – although Glass Parodies are becoming as frequent as Harlem Shake videos. Privacy is something we should treasure, agreed.   But the ship may have sailed in our video obsessed culture.