Director Patty Jenkins has slammed ‘false’ claims that Wonder Woman is a ‘mess,’ following a leaked letter from an alleged former employee of Warner Bros.

The letter, which criticizes studio CEO Kevin Tsujihara for his handling of blockbuster films, particularly the much maligned DC Comics universe, has gone viral, prompting Jenkins to respond on Twitter.

Warner’s superhero tentpole has been divisive to say the least after Man of Steel, Batman V Superman and now Suicide Squad all receiving mixed responses from critics and fans.

Here is the portion of the letter, send from an alleged former staff member who goes the by the name ‘Gracie Law,’ which claims that the Wonder Woman production is having problems.

“What are you even doing? I wish to God you were forced to live out of a car until you made a #1 movie of the year.“Maybe Wonder Woman wouldn’t be such a mess. Don’t try to hide behind the great trailer. People inside are already confirming it’s another mess. It is almost impressive how you keep rewarding the same producers and executives for making the same mistakes, over and over.”

The film’s trailer was a big hit at Comic-Con, and actress Gal Gadot’s performance as Wonder Woman in Zack Snyder’s Batman V Superman was considered to be one of the movie’s saving graces. There is no way of knowing if these claims have any substance and of course Jenkins has predictably called the letter “entirely false” and “made up bs”.

In one of her tweets, she said: “Woah, just saw this press about WW having problems. Are they serious? This is some made up bs right here. Made up! Produce a source, anyone.” 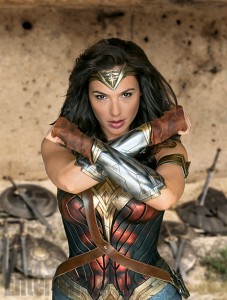 In another, she added: “Zero about the movie we are making has been called a mess by anyone in the know. Fact.”

It’s worth noting that Suicide Squad, which enjoyed a record-breaking August opening after being torn apart by the critics, has dropped a whopping 67% in its second weekend, pulling in just $43.77 million. That blockbuster was also plagued by rumors of problems between David Ayer and the studio, and underwent extensive reshoots.

So whether the claims about Wonder Woman are true or not, it’s fair to say Warner Bros. and DC Comics could have done without the negative publicity.

Here are Jenkins’ tweets below – Wonder Woman opens in June, 2017.

Woah, just saw this press about WW having problems. Are they serious? This is some made up bs right here. Made up! Produce a source, anyone.

Isn’t until you are intimately involved in these things that you realize how totally false these rumors can. Let me reassure you…

Zero about the movie we are making has been called a mess by anyone in the know. Fact.

Real lasso of truth, time, will reveal that letter to be false soon enough. But lame something so transparent in its agenda gets traction.