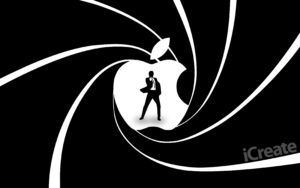 The movie distribution game is changing. Again. In fact, one could say that’s always in a state of flux. But with the large tech companies getting into the streaming game, now, it’s starting to look like they want a piece of the theatrical pie as well. That’s pretty much how it would be if Apple can manage to lock down the distribution rights to MGM’s James Bond film franchise.

Next up is “Bond 25,” and Daniel Craig has agreed to return to the iconic role for two more outings, and Blade Runner 2049’s Dennis Villenueve said to have the inside track to direct the next one.  The scheduled release date is expected to be holiday movie season of 2019, but as of now, an official distribution deal is not in place.

But even after 40 years and 24 films, many insiders believe that there’s untapped potential in 007, like a cinematic universe that hasn’t been exploited. “In the world of Lucasfilm and Marvel, Bond feels really underdeveloped,” quotes the Hollywood Reporter of someone familiar with the bidding process.  The Bond franchise could have adventures for other members of the “00s,” or even his closest friend in the CIA, Felix Lighter. There’s a lot of untapped potential there. But to be honest, I think when it comes to the Ian Fleming’s swashbuckling spy, I don’t know if I want more of that world without Bond in the middle of it.

Although Warner Brothers is the likely candidate to scoop up the man from MI6 after Sony’s deal expired in 2015,  Apple is trying to make it a bidding war.  With the next chapter of the Bond film franchise about to be made, MGM is looking for a long term deal, and the all the usual members are in the running. Sony wants the franchise back, but clearly they aren’t giving MGM what they’re looking for, and so Warner Bros, Universal and Fox are in the loop.  And streaming is starting to change everything,  even Amazon is tempted. You’d think that Netflix would also give it a go, since they’ve gotten into the theatrical distribution game with some low budget and independent films and have recently lost the Disney/Marvel/Star Wars Catalog. But so far they haven’t.

Apple is the biggest digital outlet for movies, so I think they are always present in the conversation whether they’re upfront or behind any other distributor out there that’s turning to them for real control in the digital market. – Yale Chasin, United Talent Agency

The fact is, that producing the high profile action tentpole is expensive. Big budget stunts and effects are all iconic hallmarks of a Bond epic, and lately, the franchise is barely scratching a profit. But 007 still seems to have enough interest moving forward. And with over $100 billion in the bank, Apple is looking to land him. And even if they don’t, it’s clear that the mere mention of internet is causing the other major players to push MGM to stay “in the family” as it were and close the deal before the tech giants can up the ante.  Apple also has an advantage, thanks to the recent hiring of former Sony Pictures TV executives Zack Van Amburg and Jamie Erlicht. Granted, they’re coming from the TV side of the equation, but being familiar with Sony’s catalog will certainly give them a leg up in courting one of the most valuable franchises in cinema. So I wouldn’t count Cupertino out just yet. And can you just imagine Q having a laser coming out of an Apple Watch?

But in the end, I’m betting that Bond goes to familiar territory, though it would sure be ironic if Warner Brothers landed the rights, considering that they also distributed the only James Bond film that wasn’t in the MGM catalog …. Never Say Never Again. And couldn’t it be fun to make that canon?

By Danny F. Santos (doddleNEWS) I like to keep these Doddle Digests thematically similar but sometimes the week’s news is a bit all over the place. This week, we have news from the 007 James […]

By James DeRuvo (doddleNEWS) In a quick update to the press, Apple senior director of Mac Hardware Product Marketing moved to assure the professional community that not only is the next generation “Modular Mac” Pro […]