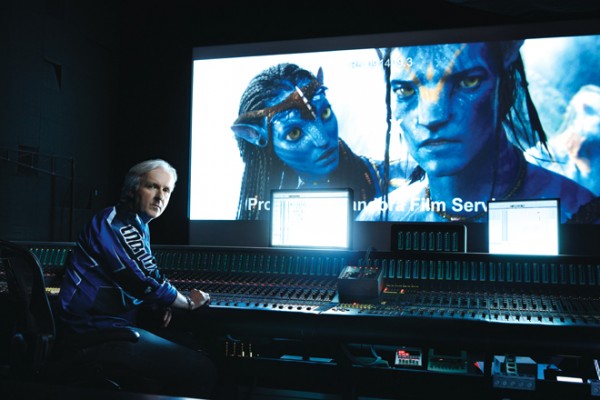 Avatar director James Cameron went on French Radio Station RTL recently to talk about the Avatar sequels and how new technologies he’s developing with WETA Workshop in New Zealand are going to speed up the production process. In addition, Cameron said that shooting in high frame rate is still a possibility.

Still in pre-production, Cameron says that progress on the sequels is going great, and that they promise to be spectacular. We already know that Sam Worthington and Zoe Saldana have signed up for all three, and that was huge step moving forward.

Cameron said that the first film took four years to make due to the CGI-heavy theme, but that advancements in software design promise to cut production design dramatically. He also said that Weta Digital is developing a whole new set of tools and streamlining the CGI software in order to streamline the production process. “We expect to be able to accelerate the process,” Cameron said.

“I haven’t made a final decision on whether the entire film will be shot in high frame rate, or only parts of it…”

Cameron also said that he’s still evaluating the benefits of shooting in 48p high frame rate, but that he’ll certainly be shooting at least parts of it in 48p, maybe the entire film. But he also said he plans to shoot in native 4K since by then, there will be plenty of 4K digital theaters.

That implies, in my view, that Cameron has no plans to release the Avatar sequel on film. And with studios like Paramount and Fox already announcing plans to go 100% digital, with a few exceptions, that rather makes sense. Cameron has always pushed the digital envelope, so I think he has no problem looking forward, rather than hanging on to the past of celluloid, like Interstellar director Christopher Nolan.

“It’s a great world. I love being in Pandora.”

Cameron also said that the nice thing about developing the sequels is that he’s already established the world and the main characters, so he can just dive right back into it and the audience will be familiar with the back story and the universe itself. And he promises there is plenty of material and events to drive future films.

“You’ll see new worlds, new habitats, new cultures, while the primary human view of man vs. nature stays the same,” Cameron told RTL. “It’s such a rich world, I can explore any idea or theme I want. And you don’t have to spend so much time setting that stuff up.”

“It’s going to be a lot of new imagery and a lot of new environments and creatures across Pandora. We’re blowing it out all over the place. At first I thought I was going to take it onto other worlds as well, in the same solar system, but it turned out not to be necessary. I mean the Pandora that we have imagined will be a fantasy land that is going to occupy people for decades to come, the way I see it.”

Cameron is currently planning three Avatar sequels, which he will be filming from his adopted new home in New Zealand, which managed to keep the Titanic director from moving to Australia or the UK with a nice 25% tax break. The films will be released starting in 2016 and every year after that. “It’s quite a thrill to be officially saying that we’re bringing the Avatar films to New Zealand. We had such a wonderful experience here making the first film,” Cameron said.