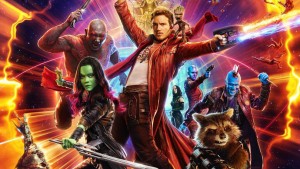 Recently, while speaking on the World Building panel at this year’s E3, the writer/director revealed that he completed the first draft of the next movie’s treatment, but hit a problem. Here’s what he said (via Cinema Blend):

“I’m writing Guardians of the Galaxy Vol. 3, and I finished the first draft of the treatment yesterday, which I’m excited about it and I feel really great about it. But there’s one little thing that I had in the first movie… Now, Marvel, MCU canon is crazy and I’ll get super geeky for two seconds. There’s the 616 universe which is the Marvel Comics Universe, which people get hung up on that canon, and then there’s the MCU, The Marvel Cinematic Universe, which has a separate canon which is inspired by but not exactly the same as the 616.

“I did something in the first movie of Guardians where it was in the background, but it was distinctly there, and people know that it’s there. And I’m like goddammit, because I have a really good storytelling reason for breaking the canon, and I stayed up last night figuring out if I’m gonna do it or not. I still don’t know.”

When pressed for a bit more information on what canon he is thinking of breaking in Guardians of the Galaxy Vol. 3, Gunn went on to describe the problem:

“I’ll actually tell ya. In the first movie there is the mugshot sequence where the characters go through, and they’re going through the mugshots and having their picture taken. And the Nova Corps has information about each of the characters coming up on their machinery. Those things are something that your average viewer doesn’t see at all. But there’s a lot of background I put into those things about who they’ve worked with, where they are from, what’s going on. And it’s one of those things that I’m thinking about changing.”

Honestly, as much as I am a stickler for detail and loath canon being broken, I don’t have too much of a problem with this. First of all, who even knows if Nova Corps has the correct information? Maybe they were misinformed? I’m sure that fans could explain away any inconsistencies even better than that.

Then there’s also the fact that this wouldn’t be the first time Marvel Studios has broken with canon. The biggest example of this would be the post-credits scene in Thor, which shows Dr. Selvig under Loki’s control when Nick Fury recruits the good doctor on the Tesseract project.

From the sound of it, Gunn is worried about a detail that most fans likely haven’t even noticed, so I don’t think it is too big a problem. All it really does tell us, however, is that Gunn is as big of a nerd as a lot of us are, and that the first draft of the treatment is already completed which could mean it might be the first movie after Avengers 4., which opens May 3, 2019. Guardians of the Galaxy Vol. 3 could open in early 2020, possibly May.