It’s called “development hell.” While some books sew up the movie rights before even being written, and some get involved in bidding wars, Steve Alten’s prehistoric shark thriller The Meg was more of a Hollywood Development Odyssey. 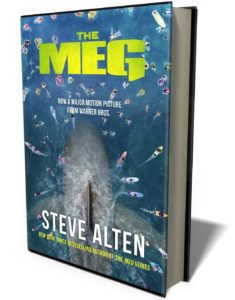 Alten wrote The Meg, back in 1997. It was a sure fire hit, and soon, people were wondering when it would hit the silver screen. At the time, though, shark movies had pretty much been played out, thanks to Universal’s never ending Jaws sequels, and a terrible copycat series called Deep Blue Sea. This left audiences thinking that shark movies were rather ho hum. So how could The Meg change that?

Alten’s take was to go big. really big, and tell the story of the mysterious megalodon, a shark as large as a bus that hunted whales and other very large creatures during the late Cretaceous Period. Long believed extinct, no one really knew what The Meg looked like since the only part of the creature to survive fossilization were its teeth.  But since they are very similar to those of the modern Great White, there was just enough of a mystery.

And that’s where Alten’s novel (along with its sequels) filled in the blanks. Following the underwater adventures of a Navy deep-sea diver  Jonas Taylor, The Meg was akin to Jurassic Park meets Jaws. Going in an out of development, first with New Line Cinema, with Jan DeBont, and then Guillermo Del Toro attached to direct. Scheduled to be released in 2008, the film was delayed several times and then New Line finally let the rights expire.

Alton took his thriller elsewhere, ending up at Warner Bros. with director Eli Roth, and then John Turtletaub, fresh off his success with National Treasure, and action star Jason Statham signed as Jonas Taylor. Now The Meg is the hottest film of the summer. Alten sat down with us to talk about his journey in Hollywood’s development hell, and what’s next for the prolific author.

Here we are, a week after The Meg’s release (#1 worldwide), after over 20 years of false starts and turn-arounds. How are you feeling? Numb.  I always had big expectations, so I am not surprised. It has been a humbling week.

What do you think of the movie, plus the director and cast? Love them all… especially Jason Statham as Jonas Taylor. And don’t forget my hero – producer Belle Avery.

How much input did you have into the screenplay for the movie? Did they use any of your past screenplays? Belle and I co-wrote the script used to obtain Gravity Pics an the funding. She safeguarded the project from there.

Is there any news on a sequel to the movie? Too early, but I am sure it is being discussed.

Any of your other novels being optioned? The Loch? Yes. The Loch was optioned by Belle a year before MEG went into turnaround at New Line. It is in development, along with one other Alten novel.

What prompted you to continue the Meg series, even though Generations was supposed to be the end? I had a wild idea and said WTH? Maybe I’m not done with these characters yet!

If you haven’t seen The Meg, you should! Just don’t go out into the ocean after. You never know!

The best summers are the ones where unlikely swimmers are on the menu for prehistoric ocean killers terrorizing the beaches. It worked with a 25 foot shark in Jaws, and it’s going to work for […]

By Danny F. Santos (doddleNEWS) This edition of the Doddle Digest asks a couple of important fandom questions. Star Wars and the DC Extended Universe have had their own behind the scenes reshuffling over the […]